Type NASA Dart Mission in Google and the result will leave you appalled; Watch

Google has chosen a unique way to mark NASA's achievement on its search console. People who will do a Google search for NASA Dart Mission will get a mind-boggling surprise. 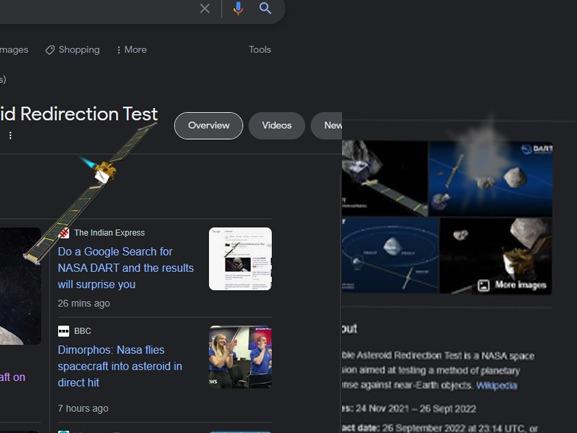 America's National Aeronautics and Space Administration (NASA) etched its name into the history books as its Double Asteroid Redirection Test (DART) successfully knocked an asteroid off its course, demonstrating its ability to defend the planet from a potentially disastrous asteroid impact in the future. The success of NASA's Dart Mission is seen as one of the most significant developments in space technology as it has enabled the Earth to defend itself from any dangerous asteroids or meteoroids in the future. Now, Google has chosen a unique way to mark NASA's achievement on its search console. People who will do a Google search for NASA Dart Mission will get a mind-boggling surprise.

When anyone around the world does a Google search for NASA's Dart Mission, the search engine will display a small animation of a DART spacecraft crashing into Google's page. Interestingly, the NASA Google Dart Mission animation further tilts the front page in order to show the success of Double Asteroid Redirection Test by the American Space Agency.

For the unversed, NASA’s Double Asteroid Redirection Test (DART) – the world’s first planetary defense technology demonstration – successfully impacted its asteroid target on Monday after flying for 10 years. As a part of NASA’s overall planetary defense strategy, DART’s impact with the asteroid Dimorphos demonstrates a viable mitigation technique for protecting the planet from an Earth-bound asteroid or comet, if one were discovered.

The mission’s one-way trip confirmed NASA can successfully navigate a spacecraft to intentionally collide with an asteroid to deflect it, a technique known as kinetic impact. The investigation team will now observe Dimorphos using ground-based telescopes to confirm that DART’s impact altered the asteroid’s orbit around Didymos. Researchers expect the impact to shorten Dimorphos’ orbit by about 1%, or roughly 10 minutes; precisely measuring how much the asteroid was deflected is one of the primary purposes of the full-scale test.