Nirmala Sitharaman carried a red coloured cover with having a symbol of national emblem on it which has tab inside. Author : Priyanka Vinayak 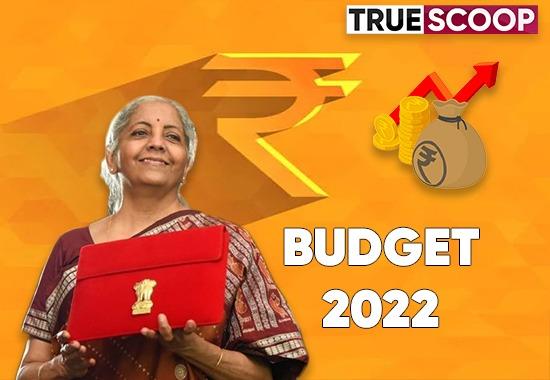 Finance Minister Nirmala Sitharaman and Ministers of State for Finance, Pankaj Chaudhary and Bhagwat Kishanrao Karad, and senior officials of the Ministry of Finance on Tuesday met President Ram Nath Kovind ahead of the Union Budget 2022-23 presentations.
The Cabinet is scheduled to meet at 10.10 a.m. to give the ascent to the Budget Document. And all eyes are on the Finance Minister as to what she is going to give relief to the public and keep the growth engine going at the same time.
Nirmala Sitharaman will be presenting the Union Budget 2022 in Parliament at 11 am on February 1. She wore a rusty brown saree with off-white border detailing that spread throughout the sides. Sitharaman paired the saree with a white shawl and white face mask. She completed her look with a red bindi and tiny earrings, which complimented her golden chain and bangles.
But what caught our attention is a red coloured cover with having a symbol of national emblem on it. In that cover, Sitharaman carried a ‘Made in India’ tablet which replaced British-era’s briefcase and bahi khata.
This move aims at a paperless Budget; a move initiated by the Modi government towards the ‘Digital India’ mission. This is for the second consecutive year when the budget is going to be presented in a paperless manner.
Also read: Key expectations from Union Budget 2022: 'Tax exemption, hike in salaries, cryptocurrency & more'
Indian Finance Ministers started carrying a hardbound briefcase from 1970 to 2019. This trend was replaced by the Modi government last year. The government had launched the 'Union Budget Mobile App' in 2021 so that the general public could access it simply with a few clicks.