Yogi Adityanath-led BJP is almost set to make their 2.0 government in the UP after getting more than 266 seats out of 403 seats as per given current trends in Election Assembly, 2022 by 05:03 PM IST on Thursday. 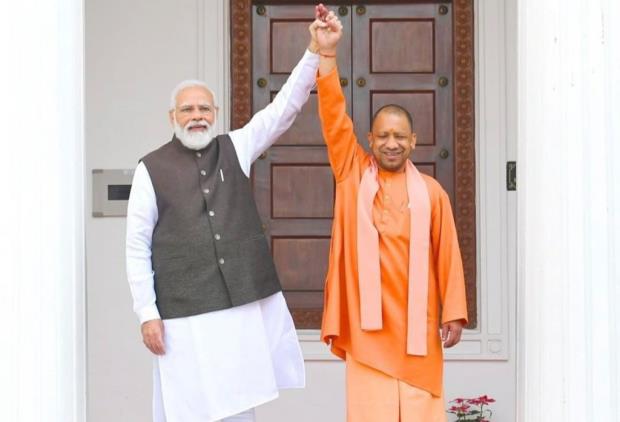 Yogi Adityanath-led BJP is almost set to make their 2.0 government in the UP after getting more than 266 seats out of 403 seats as per given current trends in Election Assembly, 2022 by 05:03 PM IST on Thursday.
And Yogi Adityanath is also all set to rule with Bulldozer after thrashing other parties in UP.

Seats Divison in UP Election 2022:
Here are the key points and analysis of UP Election 2022
1. The biggest reason for BJP's big victory?
Undeclared support of BSP. In 122 seats, BSP fielded candidates who belonged to the same caste as the SP candidate. Of these, 91 were Muslim majority, 15 Yadav majority seats. These were seats in which the SP had a strong chance of winning. Out of these 122, BJP is leading in more than 64 seats. Here the margin of victory and defeat is also likely to be less.
2. What was the biggest mistake of SP?
Couldn't extricate herself from the image of the Muslim supremacist party. How many SP leaders, especially Abbas Ansari, son of Bahubali Mukhtar Ansari, threatened the officers. How scared the officers are, cannot say. But a large number of Hindu voters who were thinking of voting for SP were scattered.
3. Was the BJP successful in polarizing the Hindu vote?
Yes, Modi-Yogi constantly linked everything with Hindutva. It was started in the first phase itself by Amit Shah from Kairana. And in the last phase, the way Modi stayed in Kashi for 3 days, he was able to prove that he is a Hindu well-wisher.
Also Read: “Punjab needs a vision; If AAP has it, Punjab will develop,” says Dr Satnam
This is the reason why BJP's vote share in trends is 42% despite Muslims not getting votes. 3% more than last time's 39%. At the same time, the vote share of BSP is visible at 12.7%, which is 10% less than the last time's vote share of 22.9. This means that the core vote bank of Hindu Dalit Mayawati has shifted to BJP in large numbers this time.
4. Did BJP win from Ram temple and Kashi Vishwanath temple?
To some extent yes. Although there was a very close contest in these two seats, both these temples proved to strengthen the BJP's face of Hindutva. There is a tough competition between the Ram temple seat in Ayodhya and the Vishwanath temple seat in Varanasi. Dr Neelkanth, the minister of the government that will go back for a long time in the seat of Vishwanath temple, has now gone ahead.
5. So are people not divided into castes?
Divided, but very rarely. In western UP, Jats were divided into urban and rural. There was a difference even among the upper castes. Dalit votes shifted from the BSP camp to the BJP for the first time. This is the most positive aspect of BJP in terms of future politics. In the same way, Yadav, the largest part of SP, was also divided into two parts, Ghosh and Kamaria. BJP seems to be benefiting from this.
6. How long did the Modi magic last?
This time too Modi magic has gone. Modi covered about 192 seats by holding about 19 public meetings. In most of these, BJP is leading.
7. How much work did Yogi's bulldozer do?
Yogi talked about bulldozers in 58 rallies out of 70. BJP has gone ahead in all these seats. Yogi made the bulldozer a symbol of action against the mafia. People saw it as an improvement in law and order. The effect of which was also visible in the result.