UP Elections 2022; 2,500 SP workers have been charged for violating Covid rules during 'virtual rally'

After hundreds of followers showed up to the party headquarters on Friday to physically attend a 'virtual rally,' Lucknow police have arrested up to 2,500 Samajwadi Party employees. 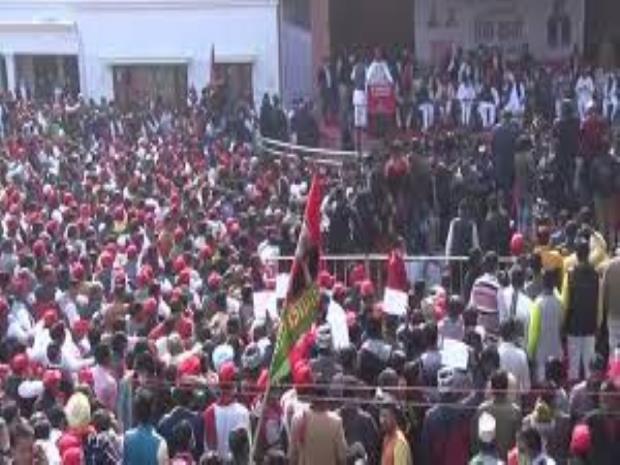 After hundreds of supporters showed up to the Samajwadi Party headquarters on Friday to physically attend a 'virtual rally,' Lucknow Police have filed a FIR against the party's officials. SP head Akhilesh Yadav and former BJP leader Swami Prasad Maurya spoke during the event.
According to the Lucknow Commissioner of Police, an FIR has been filed against over 2,500 Samajwadi Party officials under the Indian Penal Code (IPC) sections 188, 269, 270, and 341 as well as relevant parts of the Epidemic Diseases Act. Before a FIR was filed in this case, the municipal police head said that video footage was obtained.
The 'virtual rally' shows Lucknow Police removing the throng gathering outside the SP office for breaking Covid-19 norms.
The city police are being deployed wherever people are assembling in large numbers in defiance of the EC's instructions, said Lucknow Commissioner of Police DK Thakur earlier in the day. He continued, "We got information on social media about masses forming outside the SP office and sent police men to remove the protesters."
The Samajwadi Party's virtual gathering, according to Lucknow District Magistrate Abhishek Prakash, was staged without prior authorization. "Upon receiving information, a police team and magistrate were sent to the SP office. Action will be taken on the basis of their report," DM Prakash stated.
Naresh Uttam Patel, the Uttar Pradesh unit chairman of the Samajwadi Party, remarked, "Inside our party office, it was a virtual event. We didn't call anybody, yet they showed up. People work in accordance with Covid guidelines."
"Crowds were even on the doorsteps of BJP ministers and in marketplaces," Patel remarked, "yet they have a problem with us."
The Election Commission of India (ECI) placed a ban on physical rallies on January 8 in response to an increase in Covid-19 instances throughout the nation.
While the Commission's rules did not extend to 'virtual' gatherings, it had made it plain that any party found to be in violation of its Covid-19 principles would be disqualified from campaigning.
The EC's Covid-19 guidelines state that "if a candidate or political party violates any of the above guidelines, no further permission shall be given to the concerned candidate/party for rallies, meetings, or other activities."
What occurred during the so-called "virtual rally"?
During a 'virtual rally' on Friday, Samajwadi Party president Akhilesh Yadav admitted dissident ministers and BJP MLAs into the party.
"Wickets are falling in the BJP, and Baba [Yogi Adityanath] doesn't know how to play cricket, and now he has dropped a catch," Akhilesh Yadav stated to party members at the SP headquarters in Lucknow.
"Our alliance can even win 400 seats," said the former Uttar Pradesh chief minister.
Swami Prasad Maurya, whose departure from the BJP prompted a chain of resignations, stated the Samajwadi Party-led coalition is "going to write the history of the BJP's demise."
Also Read: “BJP Like A Snake, I am The Mongoose”: Swami Prasad Maurya Lashes out BJP in a tweet
"The top BJP leaders who were fast asleep and didn't have time to speak with MLAs and ministers now face terrible nights," Swami Prasad Maurya remarked.