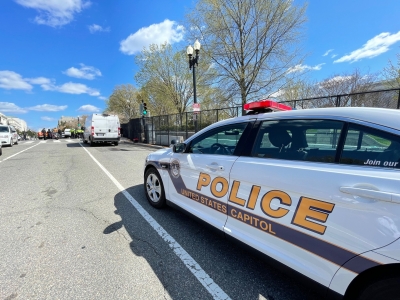 Even though the Washington is still reeling from the violent January 6 riots at the Congress, while yet another incident in the US Capitol that took place on Friday late night (IST) has shook the world. As per reports, a vehicle rammed two police officers at a Capitol’ security checkpoint, killing one of them and injuring another.

The alleged assailant was identified as Noah Green, a 25-year-old man from Indiana, was also shot dead by law enforcement.

According to police, Noah Green, as per his Facebook posts is an adherent of the Nation of Islam sect, which has been denounced by mainstream Muslims and has no connections to the faith despite the sect's name.

In a news conference, acting Capitol Police Chief Yogananda Pittman said that the car rammed two police officers at a Capitol checkpoint, killing one of them and injuring another.

Yogananda Pittman said that the driver of the car came out wielding a knife and lunged at an officer who shot him, she said.

"It is with profound sadness that I share the news of the passing of Officer William 'Billy' Evans this afternoon from injuries he sustained following an attack at the North Barricade by a lone assailant.

"This has been an extremely difficult time for US Capitol Police," Pittman said, noting the attack underscores that the Capitol Hill remains a potential target for violence.

After the attack, a heavy police force was deployed outside of the Capitol, which houses the Congress and offices of its members, including a helicopter landing on the premises.

The National Guard said that it was deploying an Immediate Response Force (IRF) made up of soldiers and airmen to the Capitol complex after the latest attack.