Vaishno Devi stampede: Here's what happened at shrine that led to death of 12 people

The casualties were from Delhi, Haryana, Punjab and J&K, said sources. 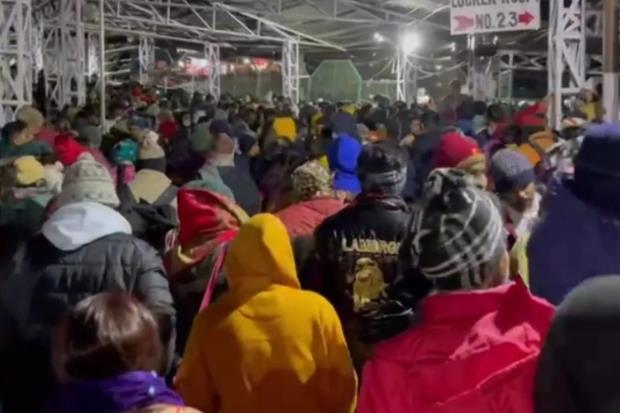 In an awful start to 2022, as many as twelve people were killed and 14 injured on Saturday in a stampede at the Mata Vaishno Devi shrine in Jammu and Kashmir's Reasi district. Devotees had come to pay obeisance at the shrine to mark the new year.
Here’s what we know so far-
On the occasion of the new year, a large number of devotees had come to pay obeisance at the shrine. Officials of the shrine said the stampede occurred at 2.45 am when a large number of devotees entered the Mata Vaishno Devi Bhawan without permission slips.
"As per initial reports, an argument broke out among some young boys near gate number three outside the sanctum sanctorum of the shrine, which led to people pushing each other. Consequently, a stampede occurred" said J&K DGP Dilbagh Singh
Dheeraj Kumar (26), Shweta Singh (34), Viney Kumar (24), Sonu Pandey (24), Mamata(38), Dharmveer Singh(35), Vaneet Kumar (38) and 30-year-old Arun Partap Singh were among those killed in the incident.
The casualties were from Delhi, Haryana, Punjab and one from J&K, according to Dr Gopal Dutt, Block Medical Officer, Community Health Centre. He said the injured were rushed to Naraina hospital.
People were evacuated after the police initiated a rescue operation. Authorities claim that the situation is currently under control.
"Prime Minister Narendra Modi is personally monitoring the relief and rescue operation," officials said.
Also Read: Mata Vaishno Devi shrine stampede: Helpline numbers issued
"Extremely saddened by the loss of lives due to a stampede at Mata Vaishno Devi Bhawan. Condolences to the bereaved families. May the injured recover soon. Spoke to JK LG Shri @manojsinha_ Ji, Ministers Shri @DrJitendraSingh Ji, @nityanandraibjp Ji and took stock of the situation", Modi said on his official Twitter handle.
The Prime Minister's Office also announced an amount of Rs 2 lakh each for the dead from the Prime Minister's National Relief Fund.
The PMO said that the amount would be given to the families of those who lost their lives due to the stampede. The injured would be given Rs 50,000, the PM's Office added.
Later, Jammu and Kashmir LG Manoj Sinha announced that ex gratia of Rs 10 lakh will be given to the next of kin of those who died in the stampede, and Rs 2 lakh will be given to those who were injured. In a tweet, he stated, "Shrine board to bear the cost of treatment of injured."
Shri Mata Vaishno Devi Shrine Board Helpline nos:
01991-234804
01991-234053
Other Helpline nos:
PCR Katra 01991232010/ 9419145182
PCR Reasi 0199145076/ 9622856295
DC Office Reasi Control room
01991245763/ 9419839557
(Story includes inputs from IANS)