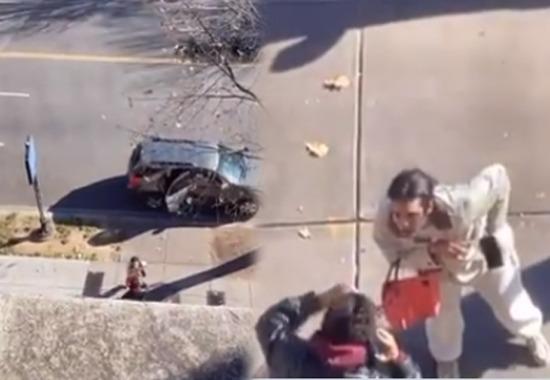 A shocking video of a US woman shouting racist abuses at her uber driver has surfaced online leaving Netizens stunned and in anguish. In the video which is going viral can be seen having an argument with a black man who is her Uber driver in DC’s cathedral heights on the sidewalk moments before she resorts to abusing the man racially.

The video which was recorded by another woman right atop a building next to the sidewalk shows the duo on the sidewalk in the altercation while a car can also be seen parking right behind them on the road.

The video appears to start shortly after the confrontation began. The woman can be heard calling the man a "psycho" and asking him to "take his medication."

TRIGGER WARNING: Seen in Cathedral Heights, DC this morning. Apparently this man was her Uber driver and is seen getting verbally and physically assaulted by this woman. She repeatedly hurls racist slurs towards him. pic.twitter.com/u0gJhUyvK5

In the video the lady can be heard saying "I am your boss. I employ you. I am your boss," before yelling the racial slur at him and trying to walk away.

The man’s reaction to the lady’s abuse goes unheard by the lady and she goes on to abuse the man repeatedly calling the driver a “Slave.” The woman who is recording all the development unfolding tenders her disagreement against the racial slur.

By the time of filing this news, the video has been watched 3.2 million times on Twitter, where the viewers are demanding stringent police action against the lady.

Uber has responded to the viral video saying that a team has been deployed on the matter and is looking for more information about it. "Behavior like this is never okay. We have a zero-tolerance policy for discrimination. If you have more information about the Uber rider or driver please DM us so we can investigate this," the company said in the tweet through its official Twitter handle.