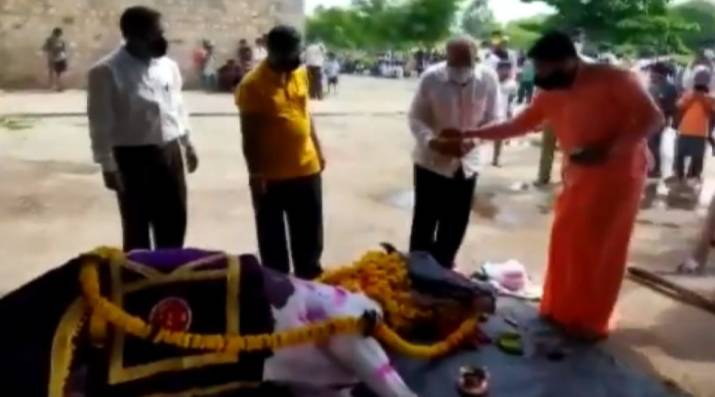 Covid-19 norms have gone for a toss in Karanataka for a mere horse cremation as hundreds gathered to observe the ceremony. Reportedly, the divine horse belonged to a local religious organization in Belagavi, a district of Karnataka.

However, violation of lockdown norms forced the officials to take stern action against the flouters and the whole area was temporarily sealed off. Moreover, the district health officials conducted tests to check the latest cases.

The video of the incident was shared by an eminent news agency ANI which showed that people were walking rubbing shoulders and even without wearing a face mask to participate in the funeral of the horse in the Maradimath area of Belagavi.

The Karnataka Police has also booked a case in relation to the incident.

It may be noted here that the divine horse belonging to a local religious organization in Mastmaradi village died on Monday morning which was followed by a massive funeral procession.

Going by the media reports, the police have cordoned off the area for the next 14 days and an FIR has been lodged against the violators. The movement of the public within the areas has also been restricted and RT-PCR tests will be conducted.

Presently, the southern state Karnataka is under lockdown till June 7 to break the chain of Covid- 19 transmission.