Punjab’s history of selfless sacrifices made by the great Gurus and Martyrs always been a source of inspiration: Governor Banwari Lal Purohit 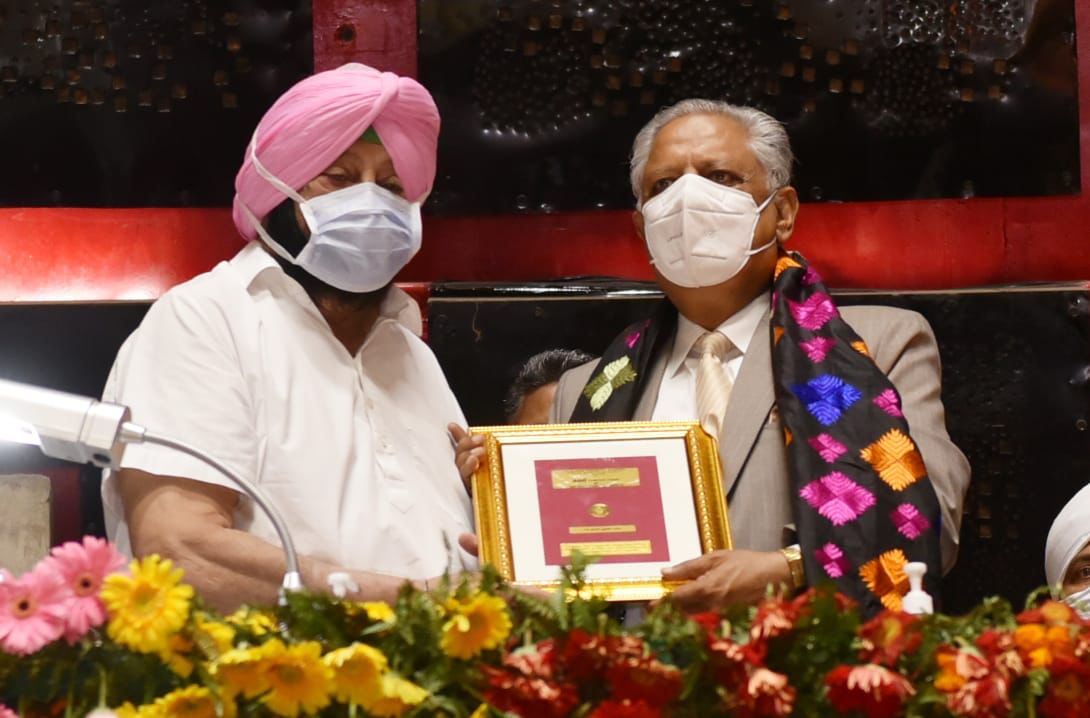 Punjab Chief Minister Captain Amarinder Singh on Friday underlined the need to propagate the ideology of the 9th Sikh Guru, Sri Guru Tegh Bahadur Sahib, around the world, to promote the values of peace, harmony, secularism and co-existence, which Guru Sahib upheld through his supreme sacrifice.

In his address on the special session of Punjab Vidhan Sabha to mark the commemoration of 400th Prakash Purb of Sri Guru Tegh Bahadur Ji, the Chief Minister mentioned the Sikh faith is distinguished by the tradition of martyrdom to uphold principles and righteousness given to us by our great Gurus.

The Chief Minister further said that the life and message of Guru Tegh Bahadur Ji constitutes the essence of what we have come to regard as Punjabiyat. He said that it comprises our saanjhi tehzeeb, our ma-boli Punjabi, our close ties of amity and fraternity cutting across people, faiths, castes and communities. When we talk of Punjab and Punjabis, Punjabiyat must follow. “This Punjabiyat embodied in the life and teachings of the Great Guru need to be understood, appreciated and nurtured carefully”, remarked Capt. Amarinder Singh.

The Chief Minister further said that the spirit of Punjabiyat has been taken by our people to all corners of the globe where they have made a special place for themselves through dint of hard work, enterprise and sacrifice. He said, “Punjabiyat often is tested by forces that represent a narrow and short-sighted perspective as against the broad all-embracing vision given by our Gurus, therefore, it is our bounden duty as representatives of the people to guard against such inimical forces very consciously and not to allow our competing political interests to ever undermine the strong foundations of this Punjabiyat.”

The Chief Minister also said that the 400th Prakash Purb of the Ninth Guru should help us renew our pledge and to show the people the right path as their rightful leaders and representatives. “I trust through this august House we can once again reiterate this message of universal peace and brotherhood on this historic occasion,” said Capt. Amarinder Singh. 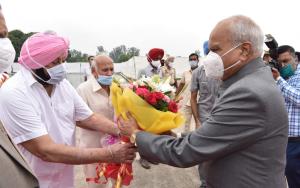 Pointing out further, the Chief Minister said that the history remembers Guru Tegh Bahadur Ji with great pride as ‘Hind Di Chadar’ for making the supreme sacrifice for opposing forced conversion and for protection of religious freedom. Guru Sahib attained martyrdom in November 1675 along with his associates Bhai Mati Das, Bhai Sati Das and Bhai Dayal Das who were brutally tortured to safeguard the religious freedom of Hindus of Kashmir under the reign of Mughal Emperor Aurangzeb.

The Chief Minister also mentioned that Guru Tegh Bahadur Ji’s son Dasmesh Pita Sri Guru Gobind Singh Ji has evocatively described his father’s sacrifice as “sees diya par sirar na diya” (I gave my head but not my creed). Guru Sahib’s sees was carried by another associate Bhai Jiwan Singh (known as Jaita Ji) to Guru Gobind Singh Ji from Delhi to Sri Anandpur Sahib. “On this occasion, let us all pay special tribute to the remarkable bravery and courage of Bhai Jaita Ji. History will remember him whenever we speak of this tragic event”, said Captain Amarinder Singh.

Dwelling on the relevance of Guru Ji’s sacrifice, the Chief Minister said that it was far more relevant and important even today as three-and-a-half centuries ago. India has its unique cultural tradition what we call Indianness, which is Idea of our country. Our ancient Indian philosophical texts have espoused the idea of “Vasudeva Kutambakam” i.e., the world is one family.

Similarly, in the Sikh faith, the Chief Minister mentioned that we have the concept of ‘Sarbat Da Bhala’ i.e., welfare of the entire humanity by extending a helping hand to the people in the hour of distress amid the natural calamities and the same was to uphold right of the people of this land to peacefully follow the faith of their choice that Guru Sahib gave his ‘shahadat’ and by doing so Guru Ji set a unique example in history of sacrificing his life, which was taken in a most gruesome and torturous manner.

Sharing his perception on India continuing to be a pluralistic country which has the unique distinction of being home to almost every faith in the world, the Chief Minister said that this concept is what gives India its richness and cultural diversity. “The slogan that we often hear and talk about Unity in Diversity is not a hollow or empty slogan. It carries a deep meaning which must be understood and internalised by all of us”, asserted the Chief Minister. He said the greatest tribute to Sri Guru Tegh Bahadur Ji would be to imbibe Guru Ji’s universal message of love and religious freedom amongst the mankind.

Outlining the celebrations plans of the state government to mark this mega event, the Chief Minister said the elaborate arrangements were earlier made to commemorate this historic event. However, the surge of Covid cases from April led us to defer the larger public programmes. Besides the functions at Sri Anandpur Sahib and Baba Bakala, the state government had proposed to also organize exhibition on life and teachings of Sri Guru Tegh Bahadur Ji, exhibition on Handicrafts, Punjabi Literary Festival, Drama (Hind-di-Chadar), Sports events, Multi-Media Light and Sound Show and Sufi Music Festival. He hoped once the Covid situation improves considerably; the most of these events would be organized.

Referring to the Infrastructure & other projects for major towns associated with Guru Tegh Bahadur Ji are already underway, adding Capt. Amarinder Singh said the historic place of Baba Bakala, connected with the life and times of Ninth Guru, from a Gram Panchayat into a Municipal town has been upgraded. Special plans are afoot to improve the infrastructure of Sri Anandpur Sahib. Similarly, 103 places blessed with Guru Sahib’s visit (Charan Chhoh) during his lifetime have been identified in 79 villages & 24 Towns, where a development grant of Rs. 50 lakh and Rs. 1 crore for each such village and town has already been sanctioned. The state has also established Sri Guru Tegh Bahadur State University of Law in Tarn Taran district. As a part of the commemoration plan of 400th Prakash Purb of Guru Sahib, several initiatives have been undertaken including release of a commemorative stamp by GoI besides release of commemorative gold and silver coins by the state government.

Apart from these, the state government has also undertaken the conservation and development of the old Jail at Bassi Pathana where Guru Sahib is reported to have been kept imprisoned on his way to Delhi.  Besides, 60 lakh saplings have been planted in 6986 villages dedicated to this Prakash Purb. Earlier more than 70 lakh saplings had been planted during Guru Nanak Dev Ji’s Gurpurb celebrations. In all, the state government has already planted more than 1.30 Crore saplings in the two Gurpurb celebrations, which will be hugely beneficial to Punjab’s environment in the long run. The state government has already forwarded a Memorandum to the Prime Minister for a grant of Rs. 938.37 crore for various infrastructural projects in the State.

In his concluding remarks, the Chief Minister said that he was happy that the Government of India has also decided to observe this historic occasion in a befitting manner. He reiterated his government endeavor to take the message of the Great Guru to not only across the country but also to different parts of the globe where Guru Sahib’s followers are settled today. Thus, the message of Guru Sahib is universal and deserves to be disseminated to the humanity at large.

Speaking on the occasion, Punjab Governor Banwari Lal Purohit described the martyrdom of Sri Guru Tegh Bahadur Sahib as one of the most important turning points in the spiritual, religious and political history of India. He further said that Guru Ji shines among the galaxy of great spiritual Gurus whose message continues to guide the humanity and remains universally relevant at all the times.

“The history of Punjab is full of selfless sacrifices made by the great gurus and martyrs who have always been a source of inspiration for all of us. Sikh Gurus inspired us in an era that was perhaps the most challenging phase of our history. No one can forget the contributions of the Sikh Gurus and their selfless sacrifices to strengthen the unity among different communities. Therefore, Sikh Gurus are respected not only by Sikhs, but also by people of all faiths across the world,” said Purohit.

Pointing out further, the Governor said that one of the key elements in the teachings of Guru Sahib has been the spirit of Sewa or selfless service. This is considered as one of the foremost pious duties that the mankind can perform enriching us with selflessness, humility and gratitude towards God.

In his speech, Speaker Vidhan Sabha Rana KP Singh said that the unprecedented sacrifice of Sri Guru Tegh Bahadur Ji would ever inspire the mankind to imbibe the message of love, harmony and tolerance thereby rising above the parochial consideration of caste, color, creed and religion. The Speaker further said that Guru Sahib’s sacrifice was not only for the sake of Kashmiri Pandits or for the protection of Hindu Religion rather it was made for the entire humanity, religious freedom and equality. “The country, state, nation and people deriving inspiration from their history and tales of martyrdom to march ahead, find the rays of hope even in the darkest of times. I bow my head in complete reverence to the divine light of the Ninth Sikh Guru and extend my heartiest congratulations to the entire humanity on the occasion of the 400th Prakash Purb of Sri Guru Tegh Bahadur Ji,” said the Speaker.

In his keynote address, the former Chief Justice of India Justice JS Khehar emphasized the importance of ‘Ardas’ in the Sikh way of life across the globe and said that we all are blessed today to celebrate 400th Prakash Purb of Sri Guru Tegh Bahadur Ji to remember and contemplate on Guru Sahib.

Justice Khehar cited the martyrdom of the Fifth Sikh Guru Sri Guru Arjan Dev Ji as the event that changed the course of the Sikh history and started the process of militarization of the Sikhs who until then were a peaceful community. "This background must be understood to understand the events that shaped the circumstances in Guru Tegh Bahadur Ji's life", said the ex-Chief Justice of India also recounting the life and events of Guru Sahib Ji who didn't bow before the injustice of the then Mughal Emperor and instead chose martyrdom to ensure protection of religious rights of all as being central to the Sikh identity.

Thanking all the dignitaries, Leader of the Opposition Harpal Singh Cheema exhorted one and all to follow the path shown by Sri Guru Tegh Bahadur Ji. He also emphasized relevance of the teachings of Guru Sahib in today's troubled times when the society is still fraught with the dangers of religious fanaticism and conflicts across the world.

On the occasion, Speaker Vidhan Sabha read out the messages sent by His Holiness the Dalai Lama and Vice President of India M. Venkaiah Naidu.