The film is said to be based on boxing with a touch of commercial elements. 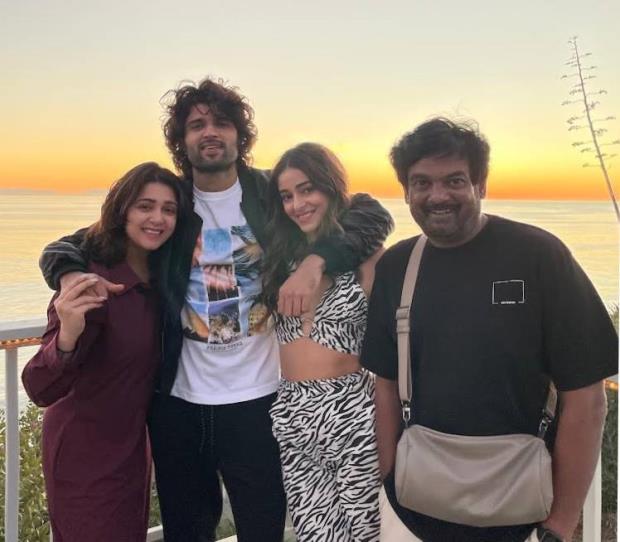 Since south Director Puri Jagannadh has announced his next project Liger with India’s new heartthrob Vijay Deverakonda and Ananya Panday, any update from the team has been making rounds on the internet.

For the latest dose, actor Vijay Deverakonda and Ananya Panday have resumed the shoot with Director Puri Jagannadh in Los Angeles, USA.

Taking to Twitter, Producer-actor Charmme Kaur shared a photo of the team who are reportedly having a good time and enjoying the sunset in Los Angeles.

Liger team in the past few weeks have shot scenes with international boxing legend Mike Tyson in Las Vegas.


The film is said to be based on boxing with a touch of commercial elements.

Also Read: Janhvi Kapoor gets emotional as she completes her first film with dad Boney

Vijay and Ananya earlier this month, along with the Liger team flew to Las Vegas for the films’ shoot. Most of Vijay’s important sequences that feature Mike Tyson are scheduled to be shot in the US and photos of Mike and Vijay from the shoot have gone viral on social media making us all more excited for the film.


The makers of the film have now resumed shooting in Los Angeles after completing the Las Vegas schedule.

Soo after the film was announced, Liger was trending while it was unimaginable that the makers would rope in Mike Tyson to play a pivotal role in the film. The film is slated to release in theatres on September 9, 2021. But due to the Covid pandemic, the shooting was postponed.
Also Read: Ananya Panday is 'forever in love with the sky'

The movie is jointly produced by Puri Jagannadh, Charmme Kaur and Karan Johar.

Vijay Deverakonda essays the role of a boxer in the film and has gone through intense training for performing his role in perfection.