Actress Anushka Ranjan is getting married to actor Aditya Seal. 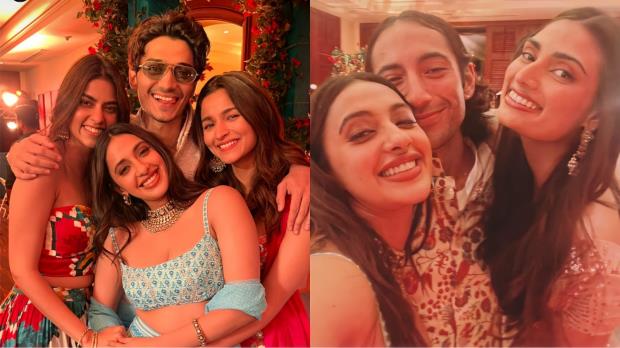 Anushka Ranjan, who is getting married to actor Aditya Seal, hosted a sangeet and mehndi ceremony on Friday. It was a night to remember with several Bollywood and TV stars attending and dancing their hearts out.

One such video of B'Town celebs Alia Bhatt, Vaani Kapoor and Athiya Shetty rocking on the dance floor has gone viral on social media, with fans simping over the dancing beauties.

Akansha Ranjan Kapoor, the bride's sister and actress and bride-to-be Anushka can also be seen in the video.

The video is trending on social media platforms and has been circulated by several social media fan pages dedicated to the actresses.

TV actors Krystle D'Souza, Arslan Goni, and Aly Goni were among the guests.

On her Instagram stories, the bride-to-be's sister shared photos from the sangeet ceremony.

Vaani Kapoor wore pink and Alia chose a red lehenga for the occasion. Krystle, on the other hand, wore an asymmetrical orange outfit and posed with Anushka in a few photos.

Also Read: Is ‘Dhamaka’ movie an attempt to expose the media houses to get more TRP?

Krystle, on the other hand, wore an asymmetrical orange outfit and posed with Anushka in a few photos.

Alia Bhatt has a jam-packed work schedule ahead of her. She will next appear in Sanjay Leela Bhansali's Gangubai Kathiawadi and SS Rajamouli's RRR. She will also appear in Darlings, which she is co-producing with Shah Rukh Khan, as well as Farhan Akhtar's Jee Le Zaraa with Priyanka Chopra and Katrina Kaif and Karan Johar's Rocky Aur Rani Ki Prem Kahani with Ranveer Singh.