Former cricketer Venkatesh Prasad posted a video of himself reciting a few stanzas of Goswami Tulsidas' 16th-century poem "Shri Ram Stuti" on Wednesday. Prasad also explained what the stanzas he sang in the video meant.

”Shri Ram Stuti’ is an aarti, written by Goswami Tulsidas in the sixteenth century. It is a beautiful call to Lord Rama. Tried to share few stanzas with meaning,” Prasad tweeted along with his rendition of the aarti dedicated to Lord Rama.

The former cricketer adds in the video that he will sing two stanzas of the aarti and explain their meanings. He begins with the opening line of the poem. See video here. 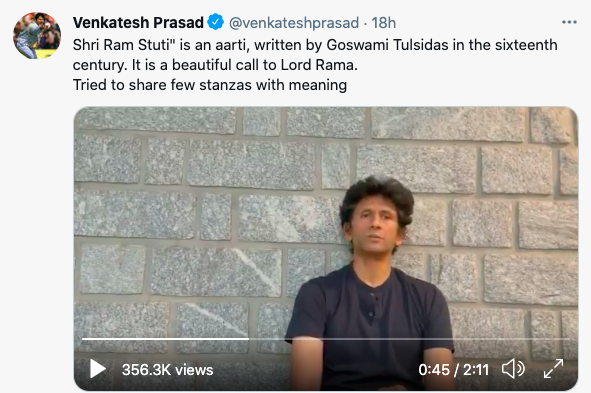 The religious hymn's second verse is then chanted by Prasad. Also Read: See Why Former U-19 Indian cricketer Smit Patel retires at 28, switches base To USA ?

Goswami Tulsidas wrote the aarti "Shri Ramachandra Kripalu" or "Shri Ram Stuti." It was composed in a blend of Sanskrit and Awadhi languages in the sixteenth century. Lord Rama is praised in this prayer.