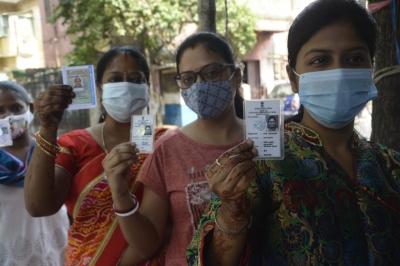 Heavy polling was recorded in the first four hours in the seventh phase of Bengal Assembly elections where people of 34 constituencies across five districts are out to exercise their franchise. According to the initial data released by the Election Commission, the state recorded a voter turnout of 17.95 per cent with Murshidabad district recording the highest polling of around 21 per cent.

As far as individual constituencies are concerned, Gazole in Malda district recorded the highest polling of 20.56 per cent and Pandaveshwar in West Burdwan recorded the lowest turnout of only 11 per cent.

However, there were some small incidents reported in the first four hours of polling though overall the polling process remained peaceful. The first incident was reported at 9.50 a.m. in Rashbehari constituency in South Kolkata where Trinamool Congress candidate Debashis Kumar alleged that he was not allowed to enter the booth by the central forces.

At 10.03 a.m. BJP candidate from Raninagar Masuhara Khatun alleged attack on her car by TMC activists. In both the cases administration reacted promptly and took the situation under control swiftly.