‘We here to Win’: Deepika-Ranveer starrer most awaited trailer of 83 World Cup out now

The film chronicles the journey of the Indian men's cricket team lifting their first World Cup trophy in 1983. 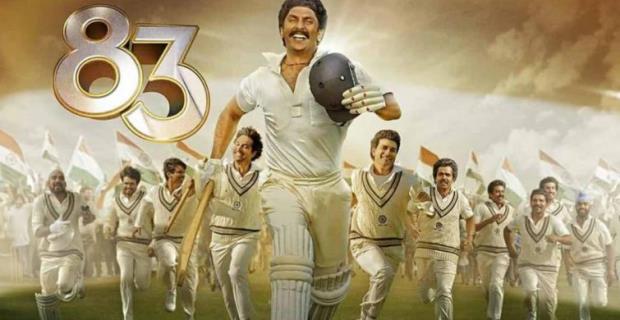 Finally!! It’s a double treat for cricket andBollywood fans. The trailer of the much-anticipated film is out today, starringRanveer Singh in the lead. Helmed by Kabir Khan, the film also stars DeepikaPadukone, Tahir Raj Bhasin, Harrdy Sandhu and others in pivotal roles. The filmchronicles the journey of the Indian men's cricket team lifting their firstWorld Cup trophy in 1983.

The epic journey of Indian cricket team from underdogsto true winners will surely give you goosebumps. Ranveer Singh as Kapil Dev issetting the screen on fire while Deepika Padukone will be seenplaying Romi, former cricketer's wife. The trailer brilliantly encapsulates theemotions that the Indian team must have had during the historic win at theWorld Cup in 1983.

Ranveer shared the trailer and wrote,"The incredible true story of the underdogs who pulled off theunthinkable! #83Trailer in Hindi Out Now! 83 RELEASING IN CINEMAS ON 24TH DEC,2021, in Hindi, Tamil, Telugu, Kannada and Malayalam. Also in 3D. #ThisIs83." 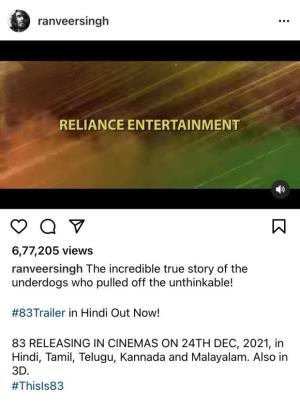 Even Kapil Dev shared the trailer on hisofficial Instagram handle and he wrote in the caption, "The story of myteam. #83Trailer in Hindi Out Now: 83 RELEASING IN CINEMAS ON 24TH DEC, 2021,in Hindi, Tamil, Telugu, Kannada and Malayalam. Also in 3D #ThisIs83."

The release of the film got delayed due tocoronavirus. However, now is all set for a Christmas release this year. Thefilm will release in Hindi, Tamil, Telugu, Kannada and Malayalam in theatres.