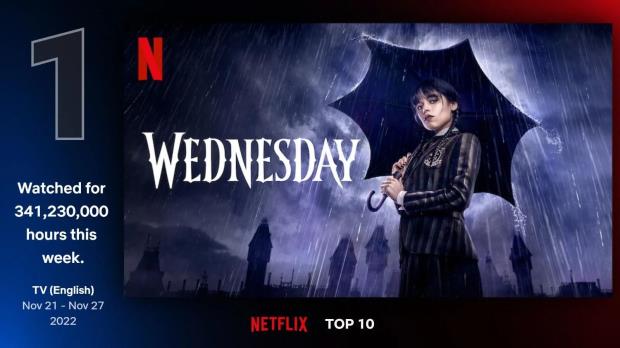 In five months’ time after Stranger Things season 4 achieved an amazing feat in terms of viewing on Netflix, Jenna Ortega’s starrer Wednesday has outclassed it to hit the all-time highest viewing record.

Stranger Things earned huge accolades ever since coming to the scene from its pop culture phenomenon to its lengthy runtime to an incredible $30 million per episode budget, season four had all.

Wednesday, a mystical thriller has been hugely impressive in this regard in a week's time, announcing the feat Netflix said, “Being an outcast has never been more in as Wednesday, the supernatural-infused mystery charting Wednesday Addams' years at Nevermore Academy, debuted in the #1 spot with a record-breaking 341.2M hours viewed.”

Stranger Things broke the English language record for hours watched after 286.79 million hours were viewed during the TV series’ first week on the streaming platform, sending the show to the number one spot in 83 countries.

K-pop Idol HyunA and Dawn break puts end to their 6 years of relationship, got engaged in February this year

Netflix further added, “The series now holds the record for the most hours viewed in a week for an English-language TV series on Netflix.”

Wednesday, starring Jenna Ortega leads the impressive cast of characters and is helmed by Tim Burton alongside showrunners Al Gough and Miles Millar, the series was #1 in 83 countries - tied with Stranger Things 4.” Now with Wednesday on top will Stranger Things 5 retake the title?