"We will continue to fight boldly. I'm still in a lot of pain, but I feel the pain of my people even more," she said. 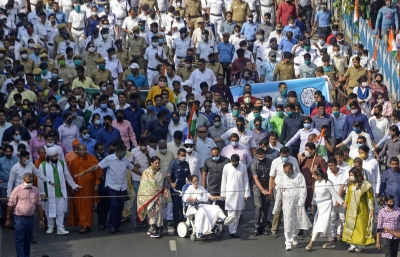 A day after being discharged from the state-run SSKM Hospital, West Bengal Chief Minister Mamata Banerjee on Sunday took part in a roadshow here, along with her nephew and MP Abhishek Banerjee.

The ruling Trinamool Congress organised the 5-km-long event from Mayo Road to observe the 'Nandigram Day'.

Banerjee, on a wheelchair but in the forefront of the rally along with hundreds of people and other Trinamool leaders, said that nothing would stop her from protecting the democratic rights of the people of Bengal.

"We will continue to fight boldly. I'm still in a lot of pain, but I feel the pain of my people even more," she said.

Banerjee said that in this fight to protect the revered land, she will continue to move around Bengal on this wheelchair. "If I go for bed rest, who will reach out to people... We have suffered a lot and will suffer more but we will never bow down to cowardice," she said, adding that her goal remained strong despite being hurt and unwell.

"Outsiders will not be able to come to power in Bengal. We will win the poll battle with a fractured leg and will come back to Nabanno once again," said Abhishek Banerjee, urging people not to cast votes for the Left-Congress-ISF grand alliance in Bengal.

Mamata Banerjee had sustained leg injuries during a poll campaign in East Midnapore's Nandigram on Wednesday evening. She got admitted to the state-run SSKM Hospital that night itself as she was rushed back to Kolkata via green channel. She was discharged from the hospital on Friday evening.

As per her campaign schedule, the West Bengal CM is slated to visit three districts - Purulia, Bankura and Jhargram from Monday. Sources said that she will travel to all these districts by helicopter but remain seated on a wheelchair as her leg injuries are not totally cured.