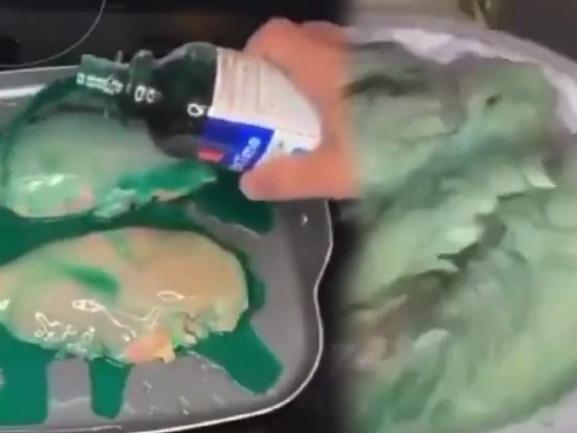 What is NyQuil chicken TikTok trend?

For the unversed, NyQuil is a cold and flu medicine created by Vicks. Vicks NyQuil Cough, Cold & Flu medicine helps to get relief from nighttime symptoms including headache, fever, body aches, runny nose, sore throat, and more. Last year, a trend of let's say a TikTok challenge went viral around the world when a man filmed himself preparing a bizarre dish by marinating chicken breasts with NyQuil counter cough syrups. Although the video was taken down later, the NyQuil Chicken TikTok challenge video had gone viral. After FDA's warning, the NyQuil Chicken TikTok trend video has gone viral yet again. In the viral NyQuil Chicken TikTok video, it can be seen a man cooking chicken breast in NyQuil cold syrup. In the video, it can be seen the chicken which is being cooked on a pan turns blue in colour like a 'venom'. The man says in the video that they have to make sure that they keep constantly flipping the chicken. However, what caught everyone's attention was when the man said that the vape of the chicken cooking in NyQuil will make you 'feel sleepy', hence the challenge was called the 'Sleepy Chicken' TikTok trend.

The FDA has issued a warning about another dangerous social media trend involving cough medicine and chicken. A recent video challenge encourages young people to cook chicken in NyQuil pic.twitter.com/ZHHJkYAcis

USA's Food and Drug Administration has issued an update advising consumers that cooking chicken in NyQuil is dangerous. "The challenge sounds silly and unappetizing — and it is. But it could also be very unsafe. Boiling a medication can make it much more concentrated and change its properties in other ways," the FDA said. The FDA said that even if people do not eat the chicken, cooking it in the over-the-counter medicine could cause them to inhale high levels of the drug's vapors. "It could also hurt your lungs. Put simply: Someone could take a dangerously high amount of the cough and cold medicine without even realizing it," the FDA said as reported by US media. The US FDA further said, "These video challenges, which often target youths, can harm people — and even cause death."