'What is protest for if farm laws stayed?': SC to decide if right to protest absolute

It also queried a farmers' body, when the top court has already stayed the three farm laws, why there is protest against the legislation? 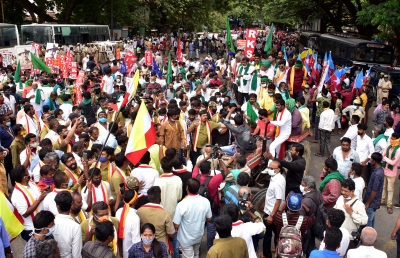 The Supreme Court on Monday decided to examine a larger constitutional issue, if there can be an absolute right to protest by the farmers against the three agriculture laws, against the backdrop of stay on the laws by the top court.

It also queried a farmers' body, when the top court has already stayed the three farm laws, why there is protest against the legislation?

A bench of Justices A.M. Khanwilkar and C.T. Ravikumar observed where is the question of going on protest once a party has already moved the court challenging the validity of the laws.

"Choose either you come to court or go on road to protest..," it told counsel, advocate Ajay Choudhary representing a farmers' body.

Counsel submitted that hearing is not progressing on the pleas challenging the validity of three laws.

Attorney General K.K. Venugopal, representing the Centre, submitted when the matter is sub judice, there should not be any protest on it.

"A large number of pleas (challenging the farm laws) have been filed... an unfortunate event happened at Lakhimpur Kheri," he submitted.

At this, the bench replied: "When such events happen, nobody takes the responsibility."

Solicitor General Tushar Mehta submitted that once the matter is before the highest constitutional court, nobody can be on the streets on that issue. The bench noted nobody takes responsibility when there is loss of public property and harm is caused to life.

"It has been kept in abeyance by the court. The law was passed by the Parliament, not by the government", said the bench, noting that petitioner farmer body has not gone on protest on road so far.

The AG said: "No more unfortunate incidents should take place."

The bench noted that no one other than the court can decide the validity of the farm laws. "When that is so, and when farmers are in court challenging the laws, why protest on street," it asked.

The bench said it will examine the principal issue, whether right to protest is an absolute right? It added when the petitioner has already a writ petition, can he be permitted to still resort to protest when the matter is sub-judice.

As counsel said a petition has already been filed before the Rajasthan High Court against the laws, the bench queried: "It is still intriguing, there is no Act in place at moment.. The Act has been stayed by the court..protest is for what?"

Choudhary submitted that debate, dialogue and protest can simultaneously go on in such matters.

The bench said it would transfer the pending matter before Rajasthan High Court to it and decide on the validity of the protest, and scheduled the matter for further hearing on October 21.

The top court was hearing a plea filed by Kisan Mahapanchayat seeking directions to authorities to allow it to stage a 'satyagraha' at Jantar Mantar, in the capital, against the three farm laws.

Also Read:
Navjot Sidhu among other Congress leaders detained in Chandigarh for protesting against Lakhimpur violence

The 'Kisan Mahapanchayat', the farmers and agriculturists body, and its President have also sought directions to authorities to provide space for at least 200 farmers or protestors to organize a peaceful and non-violent 'Satyagraha', at Jantar Mantar.