'Who are accused, whether arrested or not': SC seeks answers from UP govt on Lakhimpur violence

It told the UP government counsel that the grievance is that "you are not properly investigating the matter". 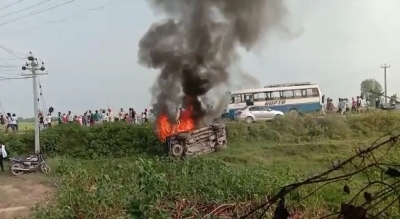 The Supreme Court on Thursday directed the Uttar Pradesh government to inform it on Friday as to who are the accused named in the FIR filed in Lakhimpur Kheri violence case and whether they have been arrested or not.

"We want to know who are the accused, whether arrested or not," a bench headed by Chief Justice N.V. Ramana and comprising Justices Surya Kant and Hima Kohli asked UP's Additional Advocate General Garima Parshad.

It told the UP government counsel that the grievance is that "you are not properly investigating the matter".

As Parshad described the Lakhimpur Kheri incident as "extreme, unfortunate", the Chief Justice responded: "We also feel the same way".

The bench also directed her to provide immediate medical attention to the mother of a person, who was killed in the incident, as a lawyer informed the bench that the mother is suffering from shock after loss of her son and is in critical condition.

"Get her admitted in nearby government hospital," it said.

As Parshad told the bench that SIT has been appointed to conduct probe and a judicial commission of inquiry has also been ordered into the violence, the top court asked her to get all the information associated with the incident - who is heading the judicial inquiry into the matter and what happened to the PILs filed in the Allahabad High Court in connection with the matter.

The bench told Prasad to get instructions in the matter and listed it for further hearing on Friday.

Two apex court lawyers had written to the Chief Justice, seeking a CBI probe into the matter under the supervision of the top court.

The letter, written by advocates Shiv Kumar Tripathi and C.S. Panda, said: "With regard to the seriousness of the killing of the farmers in Lakhimpur Kheri in Uttar Pradesh, it is incumbent upon this Hon'ble Court to intervene in the matter as flashed in the press."

The lawyers had claimed that of late, violence has become the political culture of the country, and there is a need to protect the rule of law in "violence-ravaged" Uttar Pradesh, which is evident from media reports.

Also Read: Explained: Will Varun Gandhi rebel against BJP & return to his roots?

Nine persons, including four farmers, were killed in the violence that had erupted during a farmers' protest in Lakhimpur Kheri.