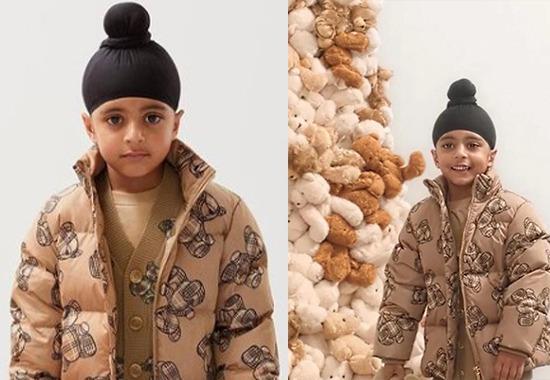 Globally renowned British fashion giant Burberry has been the talk of the town around the world, especially in India ever since it featured a Sikh kid to promote its Children Collection 2022. Burberry Sikh Kid's photos went viral in no time around the world and in India after the picture of the adorable child surfaced. Burberry Sikh Kid posed for 'back-to-school designs from 'Burberry Children' collection.'
In the viral Burberry children collection 2022 pictures, the Sikh Kid can be seen donning a printed puffer jacket which costs $790 (Rs. 63,121.79) along with a bear print wool-blend cardigan costing $530 (Rs. 42,347.27) paired with a white sneaker. Now, those wondering who is the viral Burberry Sikh kid can read further:
Who is Burberry viral Sikh Kid?
Reportedly, the viral Burberry Sikh Kid's name is Sahib Singh and is 4 year old. Sahib also has a decent amount of followers on his Instagram (6500 while writing this article). His bio reads that Sahib is a professional kids model. Sahib has an elder sister named Sutch Kaur who can be seen with him in most of his Instagram posts. The viral Burberry Sikh boy is represented by a modeling agency named South Coast Kidz Ltd. Notably, it is not his first brand advertisement for Sahib as he has modeled for various other brands in the past including 'Primark'.
Burberry was established in 1856 by Thomas Burberry and is based in London. Originally focusing on the development of outdoor attire, it has moved into the high fashion market, developing gabardine and products made exclusively for the brand.
Also Read: British fashion giant Burberry features Sikh Kid as model for children collection 2022