This is for the first time that an Egyptian leader is becoming the chief guest at the Republic Day ceremony Author : Tushar Singh 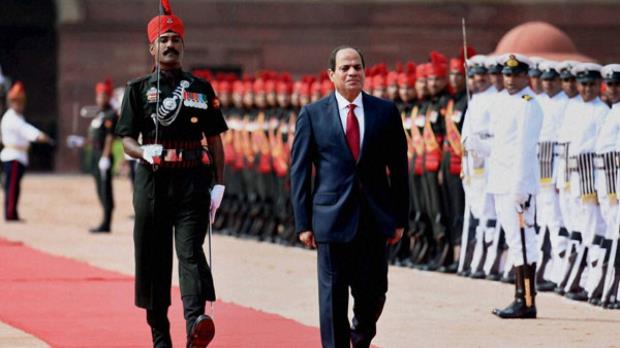 Now, the question arises why the Egyptian President is visiting India and whether gracing Republic Day 2023 parade is the only reason behind it. The answer is no. Since the beginning of Covid-19, Egypt has been gripped by an extreme economic crisis. The total foreign debt is 170 billion dollars and the inflation rate has been near around 25%.

At this time, one must be pondering why India, which stands as the fifth-largest economy in the world chose El-Sisi as the chief guest on such an important occasion. What does India want and how will it benefit from it?

If we look at post-independence history, this will be the first time that an Egyptian leader is becoming the chief guest at the Republic Day ceremony.

It has the largest population (about 109.3 million) in Arab countries. Egypt is the biggest voice against terrorism and extremism in the Organization of Islamic Countries (OIC). It has also been 75 years since diplomatic relations were established between India and Egypt.

There is a large number of Indians in Arab countries. The Indian diaspora is not only strong here, but is also respected a lot. After Saudi Arabia and UAE, India now wants to create credibility in the entire Arab world.

Therefore, India can become a major military, IT and techno power in the Gulf countries. China is also trying to spread its foot here, but America and European countries want India to play a big role here.

Egypt’s trustworthy partners during the crisis:

• The biggest problem that Egypt is facing is its deteriorating economy. Recently, it had taken a $3 billion bailout package from the IMF, while Saudi Arabia and the UAE stand firmly with Egypt.

• India exported 61,000 tonnes of wheat when Egypt was hit by a food crisis in the backdrop of the Russia-Ukraine War. While on the other hand, Saudi Arabia has given Egypt a loan of $5 billion.

• Egypt's currency pound declined by 50% since March 2022, but friendly countries did not allow it to default. The inflation rate has been around 25%, whereas, in December 2022, the foreign debt had reached $ 170 billion.

• Countries across the globe openly help Egypt, owing to its bright record of being a trustworthy nation. Egypt has a very tough stand on terrorism, drug smuggling, and extremism.