Jonny Bairstow scored the most runs for SRH in the first leg, however he withdrew before the UAE game. 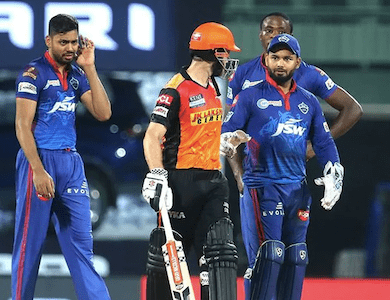 On Wednesday, September 22, the Delhi Capitals will meet the Sunrisers Hyderabad in Match No. 33 of the 2021 Indian Premier League at the Dubai International Cricket Stadium. Jonny Bairstow's withdrawal from the second match has dealt a setback to the Sunrisers, who are headed by Kane Williamson.
In the first leg, Bairstow was their leading run scorer. Because of Bairstow's absence, David Warner, who is no longer SRH's captain, may return to the top of the order. Sherfane Rutherford, who was in fine form in the CPL in 2021, has been named as Bairstow's successor by the Sunrisers.
Also Read: IPL 2021 RR vs PBKS Match 32 Highlights: Kartik Tyagi shines in Rajasthan’s thrilling 2-run win
Shreyas Iyer, who suffered a shoulder dislocation earlier this year, has returned to the Capitals' lineup. The Capitals would like to get back to the top of the standings. Meanwhile, the Sunrisers have dropped to the bottom of the standings.

The batting surface in Dubai has been quite good. However, as the game progresses, the track becomes a little more difficult to bat on. As a result, batting first and scoring runs should be the strategy. Both the spinners and the pacers are likely to receive equal assistance.

Probable best bowler of DC vs SRH Match 33:
Rashid Khan– Sunrisers Hyderabad
In the 2021 season of the IPL, Rashid Khan was the Sunrisers' only performer. The Afghanistan tweaker has taken 10 wickets at a 6.14 economy rate in seven matches. Others, on the other hand, haven't been too supportive of him. Rashid can't afford to let his guard down if the Sunrisers are to overcome the Capitals.
DC vs SRH Match 33 Prediction: Delhi Capitals to win this match.