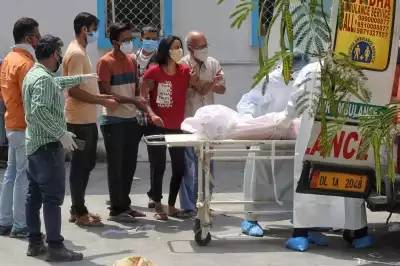 Amid a deteriorating Covid-19 situation, the national capital on Thursday recorded its highest ever single-day toll from the disease in 24 hours as 395 deaths were reported. On Thursday, while 395 patients died, 24,235 new cases were reported. During the last 24 hours, 73,851 tests were done. Out of them, 32.82 per cent were found to be corona positive. Since Wednesday, 25,615 corona patients in Delhi have also recovered. The positivity rate or the chances of infection spreading is 33 per cent, and the active cases are at 97,977.

So far, a total of 15,772 people have died due to coronavirus in Delhi. There are currently 97,977 active corona patients.

The situation in Delhi has been quite alarming, with many patients not getting a bed in hospitals, along with a widespread shortage of medical oxygen.

The city has recorded its highest single-day Covid toll even as Delhi Chief Minister Arvind Kejriwal said there was "no more panic on availability of oxygen".

The increase in daily fatalities has put the crematoriums across the city under great strain.

Meanwhile, the Delhi Police has asked the municipal body to find more sites to be used as crematoriums.

About 75 pyres are burnt daily at the Lodhi Road crematorium in central Delhi. "Earlier, we used to cremate 15-20 bodies; now numbers have multiplied, that's why we issue tokens (for waiting)," said Manish, the caretaker.

Also Read: MHA containment guidelines to be strictly adhered by States/UTs till May 31

Hospitals across Delhi also continue to send messages on social media for medical oxygen refills and many covid patients have lost their lives in the past few weeks after oxygen ran out in some hospitals.

Delhi health minister stated that they don't have enough vaccines to vaccinated people in the 3rd phase of inoculation and informed that purchase orders have been placed with vaccine manufacturers.