During the Protest Rajinder Beri MLA Jalandhar Central strongly attacked the BJP Government at the centre for the sharp price hike of essentials commodities which is sucking the blood of common man.

Led by MLA Rajinder Beri, In-Charge Punjab Youth Congress Bunty Shelke, and President Jalandhar Youth Congress Angad Dutta, the protesters raised slogans and held a protest march which started from Congress Bhawan, Rajinder Nagar, Jalandhar to BMC Chowk against the Modi government for its failure to control the prices of fuel and other essential items.

During the Protest Rajinder Beri MLA Jalandhar Central strongly attacked the BJP Government at the centre for the sharp price hike of essentials commodities which is sucking the blood of common man. 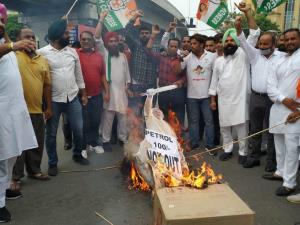 He said that in the present scenario the Modi government has failed on all the fronts. “The focus of the central government seems to be shifted from helping livelihoods to revenue generation. While entire country is battling the coronavirus, increase in diesel and petrol prices has shaken the financial conditions of the people”.

People had lost their earning during the lockdown; therefore, keeping in view the economic condition of the people amid the pandemic, the Centre should immediately reduce the prices of petrol, diesel and gas by decreasing the taxes and provide some relief to the common man, he added.

Bunty Shelke, In-Charge Punjab Youth Congress said that during Congress rule the rate of LPG cylinder was Rs 414 while now under BJP rule the rate has gone to Rs 900. “Rate of petrol per litre was Rs 60 which now has reached to Rs 102 and the rate of diesel which was under Rs 55 per litre, is now at Rs 92”. 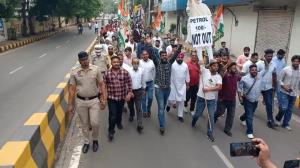 Moreover, the prices of pulses and Mustard oil have doubled in last 10 years, Shelke said, adding that Modi Govt has imposed heavy taxes on the people, as its economic policies have been total failure leading to worst ever economic situation and lowest ever growth of the Country leading to unprecedented price rise of all commodities.

Angad Dutta said that “With barely any control by the government, private companies are increasing the rates of petrol, diesel and gas cylinders time and again. Income sources of common man have shrunk after lockdowns were imposed but the government instead of providing any relief has resorted to hiking prices of petrol, diesel and other essential commodities thereby burdening people financially.

Akashdeep Singh Majithia and Navinder Mann said that the Centre has turned a blind eye towards the plight of a common man. Earlier farmers and now labourers would end their lives along with their families if the Centre fails to take corrective measures. He further added Demonetisation, faulty GST, and Covid -19, have ruined the industry and traders. The Central Government is busy in its Cabinet expansion while it has done nothing to provide any relief to common people.