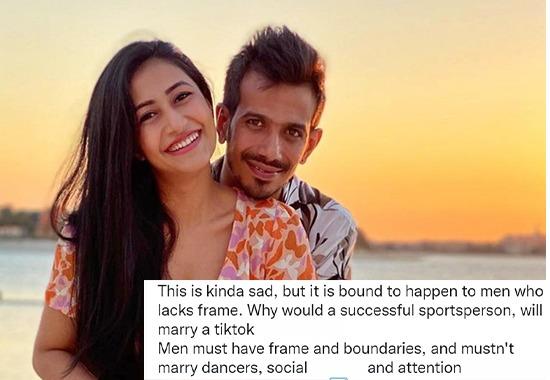 This is kinda sad, but it is bound to happen to men who lacks frame. Why would a successful sportsperson, will marry a tiktok nachaniya?
Men must have frame and boundaries, and mustn't marry dancers, social bitches and attention wh°res.

Bhai don't give her divorce, drag her in court . Whole nation is with you 🙏

Anushka is hardly doing any movie after marrying Kohli and Chahal has given all the freedom to his wife to dance with any guy she likes. But if you ask any girl about her dream husband, it will be always Kohli not Chahal. Makes you think.

aukaat😭😭 i didn't even knew who's dhanshree before she married chahal

It is pertinent to mention here that neither Yuzvendra Chahal nor Dhanashree has commented anything on the ongoing breakup speculation on social media.

Talking about Team India's ace leg spinner Chahal, he will next be seen in action at the Asia Cup 2022, where India will open their campaign against arch-rivals Pakistan on August 28, at the Dubai International Stadium.