“All of you’ll die”: Narsinghanand to police cops as they arrest the co-accused of Haridwar Hate Speech case 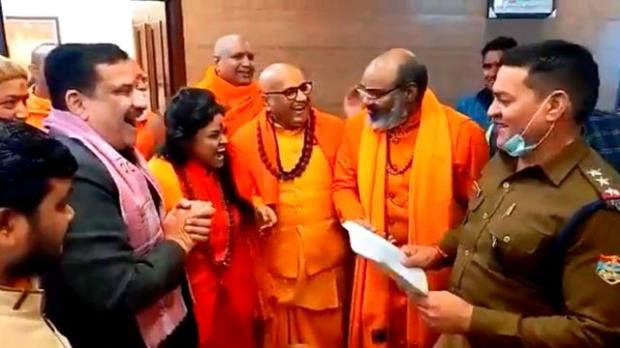 The Uttarakhand Police on Thursday arrested a co-accused in Haridwar Hate Speech case Jitendra Narayan Singh Tyagi, on Thursday. Jitendra, formerly known as, Waseem Rizvi, is the first accused to be arrested in the case.
After his arrest, Yati Narsinghanand, one of the accused religious leaders in the case, his video got viral on the Internet. In the video, the police officers were offering him to cooperate with the investigation.
Uttarakhand Police recently issued notices to Yati Narsinghanand and another accused to appear before them. Yati questioned the Police Why they arrested Tyagi? They explained that they have to make the arrest as a case is filed against him.
Narsinghanand asked, “I am with him in all the three cases. Did he do it alone?”
The officers said “Tyagi is understanding the situation” on which Yati replied, “But I am no.”
Jitendra Narayan Singh Tyaggi was a former Chairman of the Uttar Pradesh Shia Central Waqf Board, originally known as Waseem Rizvi, converted into a Hindu last month. It was Narsinghanand who organized the ceremony.
As the police officials keep insisting Yati for investigation, he said, “Tum sab maroge, apne bachon ko bhi..” (all of you will die, your children too)
Also read: PM security breach: During a meeting with Modi, Channi shows regret, saying, "jo hua uske liye mujhe khed hai"
There were total of more than 10 people including Yati, Tygai and others whose names are registered in the FIR in the speeches case.
Tyagi was arrested in Roorkee, Uttarakhand. This is the first arrest in the case. The police is doing their further investigation and will take charge upon other accused.