Sara Ali Khan in love with both Akshay Kumar and Dhanush, makes a ‘blunder’: Atrangi Re Trailer Out

Atrangi Re stars Dhanush and Sara Ali Khan in the lead roles. Akshay Kumar has an extended cameo in the film. 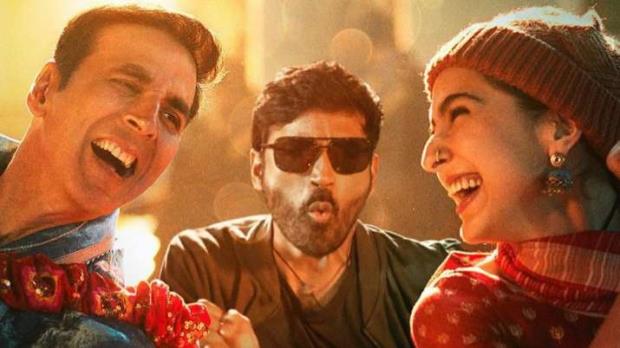 The trailer of Akshay Kumar, Sara Ali Khan and Dhanush’s Atrangi Re is a potpourri of emotions. Introducing her character as Rinku, Sara wrote while sharing the trailer: “Can’t wait to share these magical moments with all of you. Here’s presenting my Rinku to all my Darshaks.” Akshay, who plays Sajad, added: “It's time to feel the madness of this love story.” Dhanush, who plays a character named Vishnu, wrote: “Give love. Gain everything.”

The trailer begins with an introduction to Vishnu, whose family gets him forcefully married to Rinku, a feisty young woman. Both Rinku and Vishnu learn that they are not happy with the alliance and decide to part ways once they reach Delhi. But it so happens that Vishnu eventually falls in love with Rinku, who too gets fond of him.

Akshay’s Sajad brings the twist in the plot - Rinku and Sajad have been long-time lovers. The trailer reveals Rinku, in love with both Sajad and Vishnu, doesn’t want to let go of either. While Sajad appears to understand Rinku’s situation, the trailer ends with Vishnu breaking down in tears. “Blunder ho gaya humse,” Rinku tells Vishnu in the end.

The filming of Atrangi was Re-wrapped in March this year, when Sara dedicated a lengthy note to the team. “Thank you so much Aanand L Rai sir for giving me this role, this film and this opportunity. But more than that thank you for your unconditional love, unwavering support, the best India darshan, delicious khana, early morning sunrise drives to location, sufi ginger water evenings, and the most memorable year with the best team,” she wrote for the director Aanand L Rai.

Dhanush, Sara added: “Thank you for always being helpful, motivating, and inspiring. Couldn’t have asked for a better partner in this journey and yes thank you for introducing me to your amazing music and mouth-watering varieties of South Indian food (even though we could’ve avoided that indulgence during shoots).” She also issued a hilarious apology of sorts to Akshay: “And thank you so much sir for bringing so much love, laughter, energy, and positivity on our set and sorry for stalking you for photos in all our costumes sir.”

Directed by Aanand L Rai, Atrangi Re will have an OTT release on Disney+Hotstar on December 24. Speaking at the trailer launch" event, the director said: “I strongly believe that you don’t find love, it finds you. The only thing you should learn is to be a little patient. Atrangi Re is all about love, patience, and madness. It's a fabulous roller-coaster of fun and emotions."

Bhushan Kumar, who co-produces the movie, added: “The world of Atrangi Re is atrangi indeed! The film promises to bring magic to your screens and make you believe in the power of love. The motion posters have received a phenomenal response yesterday and we are excited to show you the Atrangi Re trailer!"