11 died in MP well tragedy, assistance of ₹ 2 lakh each for families of those who died 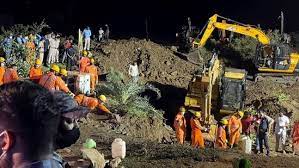 Eleven bodies have been recovered after the rescue operation in Madhya Pradesh's Vidisha district, where 30 people had fallen into a well while trying to rescue a boy. Nineteen people who fell into the well at Lal Patar village in Vidisha district's Ganj Basoda area have been rescued.

The Prime Minister's Office in a Twitter post, expressed his condolences over the deaths and announcing an assistance of ₹ 2 lakh each for the families of those who died."Anguished by the tragedy in Vidisha, Madhya Pradesh. My condolences to the bereaved families. An ex-gratia of ₹ 2 lakh each from PMNRF would be given to the next of kin of those who lost their lives: PM @narendramodi," the official handle of PMO tweeted.

According to the administration, there is no possibility of anyone else being buried under the debris, but the rescue operation will continue until the water is drained and the debris is removed.

Meanwhile, Vidisha Guardian Minister Vishvas Sarang and Revenue Minister Govind Singh Rajput have arrived on the scene to assess the situation. The Chief Minister announced in a Twitter post that the families of those who died in the incident will be provided a compensation of ₹ 5 lakh each. The state government will ensure the treatment of those injured and provide each of them with an assistance of ₹ 50,000, he added.