After assurance of a fair probe in the case, the farmers have now called off the case. 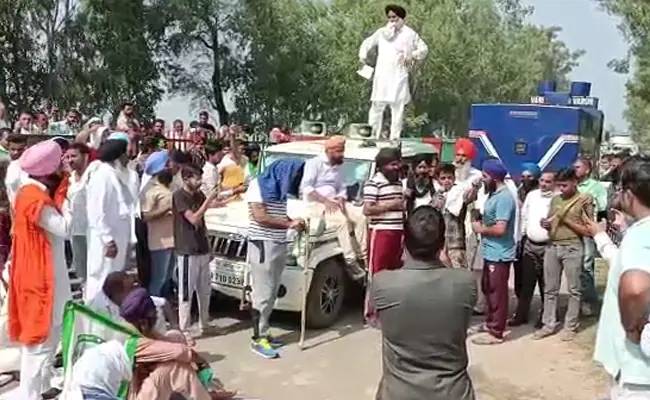 The Haryana police have filed three cases against the protesting farmers who were hit by a BJP MP’s motorcade. This has caused an outrage amongst the farmers’ groups and they said that no case has been filed based on their complaints.

The police have been put on alert after the farmers started assembling at the grain market in Ambala’s Naraingarh. "Any evidence we get, we will take action according to that. There won't be injustice to anybody. We won't take any wrong step under any pressure," senior police officer Anil Kumar said, adding "We have made all arrangements to maintain law and order."

After assurance of a fair probe in the case, the farmers have now called off the case.

The farmers in Haryana who had gathered to protest against the farm laws passed by the Centre alleged that a person was injured when the vehicle convoy of BJP MP Nayab Saini hit a group of people.

Also Read: Lakhimpur like the incident in Haryana' Naraingarh at BJP event; farmers hit and 1 injured

The protesters said that three separate cases have been registered against the farmers who were holding the protest but no FIR has been filed based on their complaint.

The injured farmer who was treated at a government hospital in Naraingarh near Ambala said that he was standing on the roadside when he was knocked down by the vehicle that was following the one in which the MP was travelling.

This incident happened just a few days after eight people died in UP’s Lakhimpur Kheri when a convoy of vehicles razed into the group of peacefully protesting farmers. One of the vehicles of the convoy registered to Union Minister Ajay Mishra was allegedly being driven by his son Ashish.

Five days after a murder case was filed against Ashish Mishra, he was arrested on Saturday night. This move by the UP police has raised the question of whether the accused was given VIP treatment because of his father.

The protests that have gained momentum in Uttar Pradesh recently, have been going on for months on major highways that lead to New Delhi. The farmers say that the new laws will demolish an established and working system that guarantees a price for their produce. On the other hand, the government is of the view that the laws will help the farmers fetch a better price.