Lakhimpur like the incident in Haryana' Naraingarh at BJP event; farmers hit and 1 injured

Kurukshetra MP Nayab Saini and other party leaders including state Mining Minister Mool Chand Sharma, were going to attend an event held at the Saini Bhawan in Naraingarh. 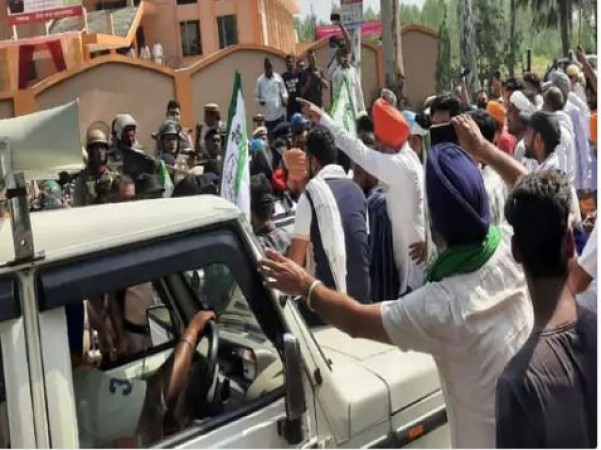 A similar episode like that of Lakhimpur Kheri district has been reported in Haryana where a farmer alleged that he was injured after a vehicle in a convoy carrying BJP MP Nayab Saini hit protesters who were agitating against the Centre the farm laws.

The farmers began demonstrating at the venue when they heard that a BJP MLA Sandeep Singh and BJP MP Nayab Saini were reaching there.

Heavy police presence was also seen at the event which was organised in Haryana's Naraingarh.

The injured farmer was taken to a government hospital in Naraingarh near Ambala and was released after he was treated.

The injured farmer said he was standing by the side of the road when the vehicle in which the MP was seated knocked him down.

The farmers in the area are demanding for an FIR to be filed against the vehicle's driver and have also worked to gherao or surround the police station on 10 October 10 if the case was not registered.

Kurukshetra MP Nayab Saini and other party leaders including state Mining Minister Mool Chand Sharma were going to attend an event held at the Saini Bhawan in Naraingarh.

The incident happened at 11.15 am after the event concluded and the convoy of cars was exiting the area. One of the vehicles allegedly hit a farmer.

A large group of farmers had gathered outside the Saini Bhawan to protest against the MP’s visit.

Identified as Bhavan Preet Singh, the injured farmer in his police complaint submitted to DSP Naraiangarh claimed that he was rammed over by one of the cars belonging to MP Nayab Saini's caravan. Allegedly, the car drove into a group of farmers who were protesting against the Centre's farm laws.

According to the police, the complainant has not suffered any serious injuries.

No FIR has been registered in this matter.

This incident has been reported four days after a similar incident that happened in Lakhimpur Kheri leading to the death of eight people, including four farmers. The violence unfolded after a convoy of cars, one owned by Union Minister Ajay Mishra and allegedly driven by his son Ashish, ran into a group of farmers who were holding a peaceful protest against the visit of UP deputy CM Keshav Maurya in the area where he was scheduled to attend an event.

On Wednesday a video surfaced online that showed the SUV deliberately mowing down the protesters who were walking peacefully by showing their backs to the vehicle.

The other four who were killed in the violence were two BJP workers and a driver of Union Minister of State for Home Ajay Kumar Mishra and a journalist working for a private television channel.

The incident at Lakhimpur has triggered a political backlash with Opposition parties accusing the BJP led UP government of protecting the offenders.
On the other hand, Ajay Mishra and his son Ashish have denied their involvement in the incident and claimed they were not present at the spot. They alleged that it was the farmers who first pelted stones at their car, the driver lost the balance and the car turned turtle, after which a few people came under their convoy.

Meanwhile, the Supreme Court on Thursday has asked the UP government to file a status report of the case by tomorrow and specifics of the actions taken so far along with detailed information of the eight people who died in the violence.