The actor quoted “Raj Kumar Hirani is one of the most talented directors of his age; I'm thrilled that we're together for 'Dunki” 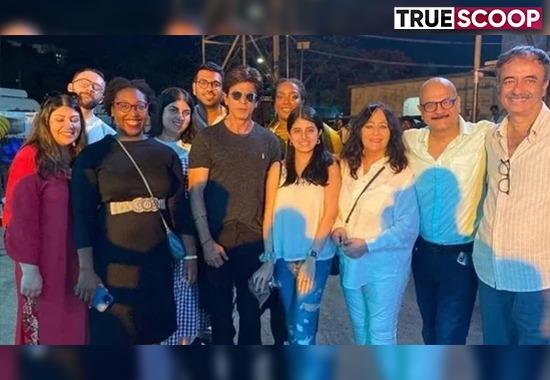 Since last year, Shah Rukh Khan has been working on his comeback movie Pathaan and has recently signed Rajkumar Hirani's Dunki. The actor appears to have already begun work on Dunki, as a new photo of him, the film crew, and a few others has surfaced on the internet. Because the image was also shared on Reddit, Shah Rukh's followers reacted to it in the comments section.
Shah Rukh Khan looks stylish with his combed hair, grey tee, and black denim, which he wears with white sneakers and dark sunglasses. As he poses with director Rajkumar Hirani and others, he is accompanied by a few women.
Fans connected the actor's appearance in the photo to his appearance when he welcomed numerous delegates at his house earlier this month. "He seems much better here than he did in the delegate's photographs," a Reddit user said of the photo. "My man cleaned up well," remarked another. As always, you're looking cute." "He's always sexy," commented another.
A fan expressed his ideas, saying, "Couple of thoughts: - Looks healthier and handsome. He needs to gain some weight. Your skin looks wrinkled as you get older. I hope he allows Hirani to do his things and doesn't interfere with the script or the process." "Almost feels like SRK couldn't make it in time there, so they borrowed from Madame Tussauds!" a fan who couldn't believe it was him remarked.
Also Read: Rumours Are Spread About Me That I Beat Up Boys: Kangana Ranaut
Taapsee Pannu plays the female protagonist in Dunki. In April, Shah Rukh had remarked of the movie, "Raj Kumar Hirani is one of the most talented directors of his age; we've always spoken about collaborating, and I'm thrilled that we're finally doing it with 'Dunki.' We've just been filming for a month, and I'm loving every minute of it. Raju ke liye mai Donkey, Monkry kuch bhi ban sakta hoon!