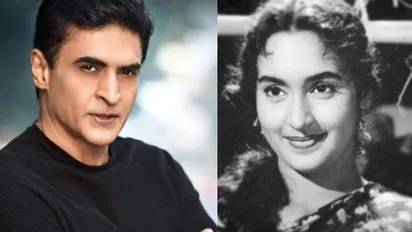 He took to his Instagram official handle and captioned the post, "Happy Birthday Ma," followed by a heart emoji.

Recently on her 85th birth anniversary her son, Mohnish Bahl shared Nutan's black and white vintage picture from one of her films, wearing a beautiful saree and smiling.

The post had so far received over 8 thousand likes and was filled with comments praising her beauty. One user said “Ethereal beauty”, " Another wrote, "I always adore her simplicity." A third commented, "Happy birthday.... still she entertains us with mind-blowing movies."

Other than this, the famous actor also posted a throwback photo with Nutan on her death anniversary in February this year, in which he is seen as a baby. He had captioned the post, "21.02.1991 ... Your presence is always felt," followed by a heart emoji.

Nutan Samarth Bahl popularly known as Nutan was one of the finest and well respected  Indian film actress who worked for more than three decades in the film industry and appeared in more than 70 Hindi films such as Hamari Beti (1950), Baarish (1957), Manzil (1960), Tere Ghar Ke Samne (1963),  Naam (1986) and Karma (1986). She married navy officer Rajneesh Bahl when she was 23 years old and was blessed with one son Mohnish, born in 1961.

Nutan died in February 1991 after a long battle with breast cancer.