The music school is located in Kabul and for almost a decade has been witnessing rapid growth under the leadership of Dr Sarmast. 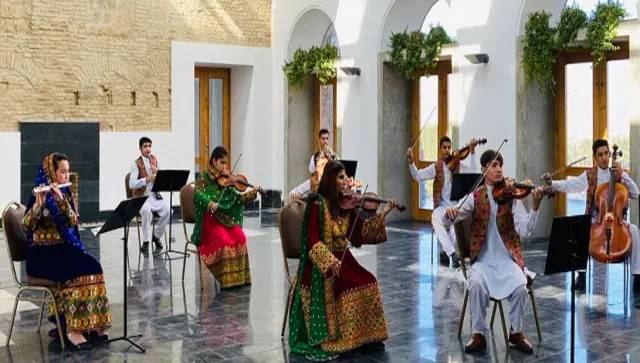 Even before it had captured the country, the Taliban had announced a blanket ban on music. The effect of this was clearly visible when the Afghanistan National Institute of Music (ANIM) had to abruptly wind up its operations and shut its doors.

"The students are all fearful and concerned. They clearly understand that if they return to the school, they might face consequences or be punished for what they've been doing," said Dr Ahmad Sarmast, the school's founder and director.

He added that out of fear, some students brought their instruments back to school after the Taliban’s takeover of the city. They believe that this is a safer alternative than keeping them at home where the Taliban fighters might discover them.

The music school is located in Kabul and for almost a decade has been witnessing rapid growth under the leadership of Dr Sarmast. He has been credited for bringing back music to the classrooms after the end of the Taliban’s rule from 1996 to 2001.

Over time ANIM had set an example in the country by teaching boys and girls in the same room which was unheard of in Afghanistan. The students were not only taught Afghani music but also western classical music. Everyone was encouraged to attend and many became the first members of their families to receive formal education and become graduates. 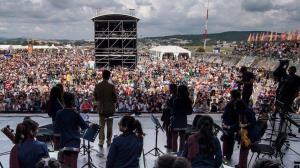 The school is also known for being the birthplace of Zohra, Afghanistan’s first all-female orchestra that had performed in front of large crowds all across the globe and at home.

Soon the institute was seen as a symbol of the country’s new identity, with equality and education for all.

As history often tends to repeat itself, Afghanistan’s fate was no different with the Taliban regaining hold in the country and putting the future of the school and music in uncertainty.

"It is a time of devastation of our dreams, of hope, of inspiration for the future," Dr Sarmast said, speaking from Melbourne, Australia, where he has been visiting family since mid-July.

As the Taliban took over Afghanistan, Dr Sarmast was sure that his staff and students would become targets and be asked to return home.

"The students are very fearful about their future - not just of their education and their [music] programme, but also about their life," he said. "They do not feel safe in Afghanistan."

Internationally recognized and respected for his work, Dr Sarmast has been under the Taliban’s scanner. His staff had informed him that the fighters were actively inquiring about his whereabouts and have visited his house in Kabul thrice.

With updates from his staff, he knows that the school has been overrun by the Taliban but no damage has been caused either to the instruments or the property as was being portrayed on social media.

Dr Sarmast’s staff has been under constant pressure from the Taliban to hand over the keys of the school but he insists he will only negotiate with senior leaders of the group.

With fears of the country heading back to the dark ages of 1996 where music was completely outlawed, severe punishments were imposed on those who were caught playing or listening to music, instruments were destroyed and musicians were forced into hiding. However, it is yet to be seen as to how strict the current ban on music will be.

The Taliban has assured that under its new governance there will be less extremism and more modernism where women have freedom and safety. However, the reality is starkly different from the assurances as the behaviour of the fighters on the ground is inconsistent.

"It seems naive, but I'm still hopeful that the Taliban might learn from the past," Dr Sarmast said. "But this hopefulness of mine is getting shaky when I see what's happening on the ground in Kabul."

During the civil war of 1990, Dr Sarmast had escaped to Moscow where he lived for 10 years and then moved to Australia, where he was the first Afghan to finish a PhD in music. After his return to Afghanistan, he was determined to blow a fresh lease of life in the age-old Afghani music.

He thinks the Taliban staying in power for five years was long enough to lose the track of music heritage mainly in the younger generations. And now after the extremist group regains the territory, all those restored skills and knowledge in a new generation are at risk of losing again.

In 2014, he was injured and was temporarily deaf due to a suicide bomb attack that gave him more determination.

Also Read: What Taliban is up to after America pulls out of Afghanistan, see 5 major developments

Dr Sarmast is a part of Afghanistan's "brain drain" and has been included in the nation’s most educated individuals who have fled the rule of the Taliban.

"I'll only be returning if I'll be allowed to do what I've been doing for the last 13 years, and put my knowledge, skills and abilities into the service of the children and youth of Afghanistan," he emphasised with his voice cracking with emotion and agitation.

With his students eagerly awaiting to open the doors of their future, Dr Sarmast said, "To my fellow Afghan musicians - do not give up your voices. Sing, play, continue to do what you've been doing.

"And to the international music community - stand in solidarity with the music and musicians of Afghanistan."