Alia grooved with her friends on the stage at the Mehendi ceremony on the song Chhalka Chhalka Re from the film Saathiya. 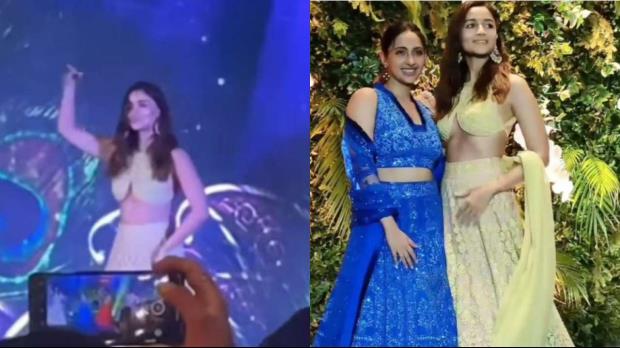 On Saturday, Actress Alia Bhat was seen posing and dancing with her best friend Akanksha Ranjan, at the Sangeet ceremony of Anushka Ranjan and Aditya Seal. The couple has been dating for 4 years and is all set to tie the knot on November 21. Recently pictures from their bachelor party went viral on the internet.

Celebrity photographer Viral Bhayani shared the video of Alia Bhatt that went viral. In the video, she can be seen having fun with her best friend Akanksha Ranjan at Anushka Ranjan and Aditya Seal's Sangeet ceremony. Alia chose to wear a light green backless legendary for the function and finished her look with jhumkas and a black bindi and kept her hair open while her BFF Akanksha went with a royal blue legendary.

Another video of Alia shows her grooving on the stage with her friends at the Mehendi ceremony on the song Chhalka Chhalka Re from the film Saathiya, which was performed beautifully by Rani Mukherjee.  Check out her performance:-

The couple Aditya and Anushka threw a Mehendi ceremony that was filled with star glitz where celebs like Alia Bhatt, Vanni Kapoor, Athiya Shetty and TV actor Krystal D'Souza were seen having fun. The soon to be married Anushka wore a mint green lehenga and danced joyfully in the videos posted on her Instagram story. In another video from the wedding festivities, Alia Bhatt looked super beautiful in a chick red lehenga that she donned with chunky earrings and minimalistic makeup.

Aditya and Anushka will tie the knot on 21 November. A few days ago, Anushka had organised a bachelorette party which was attended by Hrithik Roshan’s ex-wife Sussanne Khan, TV star Krystal D’Souza, and ‘Bigg Boss 14’ fame Aly Goni. Pictures and videos from the party are going viral on the internet where everyone is seen in colourful ethnic outfits.
Also Read: Telugu actor K. Satyanarayana back in hospital after health worsens

Alia Bhatt has a bunch of projects in her kitty. She will be next seen in Sanjay Leela Bhansali’s Gangubai Kathiawadi and SS Rajamouli’s pan-India movie RRR, while she will also appear in Darlings, which she is co-producing with Shah Rukh Khan’s Red Chillies Entertainment. She also has Farhan Akhtar’s Jee Le Zaraa with Priyanka Chopra and Katrina Kaif and Karan Johar’s Rocky Aur Rani Ki Prem Kahani with Ranveer Singh. Quite busy, the girl seems.

On the work front, Anushka Ranjan was done films like 'Wedding Pullav’, and ‘Batti Gul Meter Chalu’ and Aditya was seen in films such as ‘Tum Bin 2’, ‘Student Of The Year 2’, and ‘Indoo Ki Jawaani’. They both have also worked in a web series called ‘Fittrat’.