In a mega Cabinet revamp on Wednesday, Thakur, the Minister of State for Finance and Corporate Affairs, was elevated, along with others. 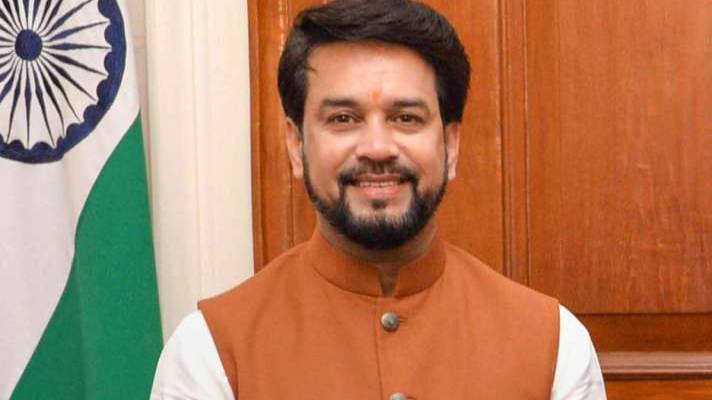 The 13-year political journey of former BCCI chief Anurag Thakur, who retained BJP's bastion in Hamirpur in Himachal Pradesh for the fourth consecutive time in 2019, is full of struggle, patience and thorns, but not as short-lived as his stint with the national cricket body.

In a mega Cabinet revamp on Wednesday, Thakur, the Minister of State for Finance and Corporate Affairs, was elevated, along with others.

Since his maiden electoral victory in May 2008 Parliamentary by-poll at the age of 34, Thakur, who served the Himachal Pradesh Cricket Association (HPCA) as its president for four straight terms since 2000, has been targeted by his rivals for being too high-profile and jet-setting.

In every Parliamentary election, Hamirpur has been witnessing more aggressive campaigning as compared to the other three Lok Sabha constituencies in the state -- Shimla (reserved), Kangra and Mandi, political observers said.

Popularly known as 'Raja Saab', Virbhadra Singh, who helmed six Congress governments in the state, did not leave any stone unturned to wrest the Hamirpur seat, a stronghold of the Dhumal family.

Singh's archrival and two-time BJP Chief Minister Prem Kumar Dhumal had devoted his maximum time and energy in the constituency to ensure victory for his son, Anurag Thakur.

In 2019, Thakur, a sharp strategist and youth icon who had served the party's youth wing as its President for seven years, won the Lok Sabha polls by a record margin of 3.87 lakh votes, defeating his nearest rival from the Congress, Ram Lal Thakur.

A cricket-related legal attack by the previous Congress government against the Dhumal family had caught it on a sticky wicket for at least five years.

But Thakur, who played a crucial role in stitching BJP's post-poll alliance with his friend Dushyant Chautala's JJP in Haryana, believes it to be a clear case of political vendetta.

"During his earlier tenures as Chief Minister, he (Virbhadra Singh) did all the damage to the HPCA (Himachal Pradesh Cricket Association). He even raised a parallel cricket association which failed. No law of the land has been violated by the HPCA. Cases against it were only political in nature and we came out clean from various courts," Thakur had told IANS.

He always blames the vendetta politics of the Congress that forced him to enter politics.

Political observers told IANS that Thakur, whenever he gets time from his busy political schedule in Delhi, prefers to devote his time and energy in his constituency.

He has to his credit developing five stadia, including the world-class showpiece stadium in Dharamsala, and two cricket academies -- one in Shimla and the other in Dharamsala. The HPCA is currently providing support to more than 500 players.

The Rs 100 crore stadium in Dharamsala first figured on the international cricket map in 2005 when it hosted a warm-up tie between the touring Pakistan team and the Indian Board President's XI.

The HPCA has also developed the Luhnu ground, which is ringed by backwaters of the Bhakra Dam in Bilaspur, besides developing the Amtar, Gumma and Una grounds.

After the Congress formed the government in the state in December 2012, the vigilance and anti-corruption bureau had filed a case of cheating and misappropriation of funds against the HPCA, the cricket body Thakur was heading.

The government had also alleged wrongdoing in the allotment of land to the HPCA for constructing a residential complex for players near the Dharamsala stadium, some 250 km from the state capital.

The state later got the sanction to initiate proceedings against two-time Chief Minister Dhumal for allotting the land during his regime to the HPCA, which was led by his son Thakur.

The vigilance department had also booked Thakur and his youngest brother Arun Dhumal for allegedly grabbing land near Dharamsala by forging revenue records.

Most of the cases were disposed of by various courts.

Elated over the elevation of Thakur, HPCA convenor Mohit Sood told IANS that his innings as the BCCI chief was shot-lived.

"Had he got the opportunity to serve the national cricket body for longer time like the HPCA, he would have definitely created wonders for the game."

At the age of 25, Thakur was elected the HPCA president, the youngest to head a state cricket association affiliated to the BCCI.

Thakur's cricketing journey began at the age of 14 as a player. He had led the Punjab U-16 team that won the Vijay Merchant Trophy.