Modi’s new cabinet is said to have the youngest lot whose average age is 58 years. 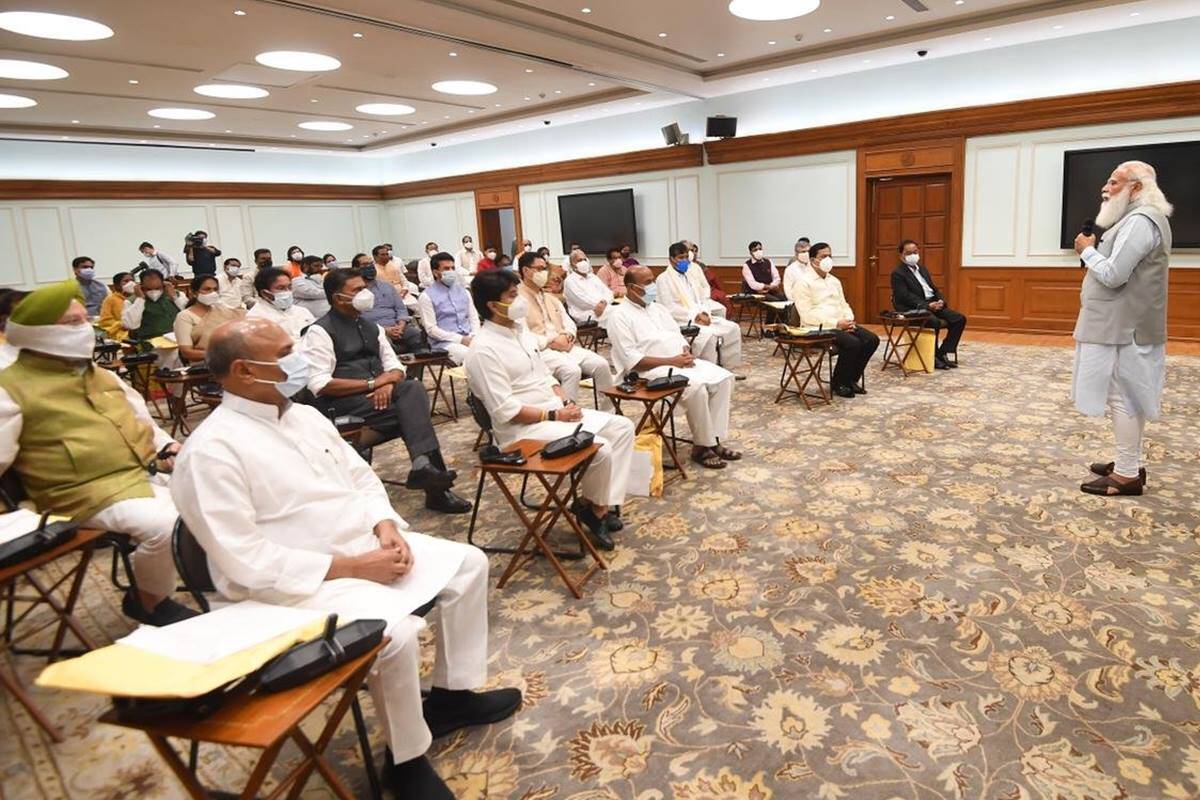 Prime Minister Narendra Modi's cabinet will see its biggest expansion for the first time. After the reshuffle, the union cabinet will be the youngest ever in Indian history, sources from the ministry said. The much-anticipated cabinet reshuffle will be announced at 6 pm. It is said that 43 ministers will be inducted today, out of which 24 will be new faces in the cabinet. Sources said that the new Council of Ministers will be like a rainbow council, which will have vibrancy and colours across all communities and regions.

Ahead of the big expansion, around 12 big ministers have resigned from the ministry, while 7 leaders have been promoted.

Modi’s new cabinet is said to have the youngest lot whose average age is 58 years.

For the first time some tribes will be represented in the cabinet, sources added.

Modi’s new ministry will also give importance to nari shakti as it will induct 11 women ministers from across nine states and nine communities while there will be 2 women cabinet ministers.

Experience of the ministers

There will be 4 former Chief Ministers and 18 former ministers of state.

39 former MLAs, and 23 such MPs who have represented the Lok Sabha constituency more than 3 times.

46 Ministers have experience of working with the Central Government.

The cabinet will have 13 lawyers, 6 doctors and 5 engineers. Apart from these, 7 former civil servants to be included, also 31 out of 43 oath takers are highly educated.

The average age of Modi’s new team members is 58 years, while 14 ministers are below 50 years of age.

Leaders who will be promoted:-

1. Anurag Thakur: Anurag Thakur 46, MP from Hamirpur in Himachal, presently holds the Ministry of State for Finance and Corporate Affairs. Has been the President of BCCI.

2. J. Kishan Reddy: Minister of State for Home. He is a Member of Parliament from Secunderabad Lok Sabha and has also been the President of Andhra Pradesh BJP.

3. Mansukh Mandaviya: Minister of State for Chemicals and Fertilizers in the government. He is a Rajya Sabha MP from Gujarat since 2012.

4. Kiren Rijiju: Union Minister of State for Sports. He is an MP from Arunachal West and also holds the responsibility of the Ministry of Minority Affairs.

5. RK Singh: Minister of State for Skill Development and Entrepreneurship. MP from Arrah Lok Sabha seat and has also been a former IAS officer.

6. Hardeep Singh Puri: Union Minister of State (Independent Charge) for Civil Aviation. He is a Rajya Sabha MP since 2018 and has also been India's Permanent Representative to the United Nations.

7. Purushottam Rupala: Union Minister of State for Panchayati Raj, Agriculture and Farmers Welfare. He is an MP from Rajya Sabha and represents Gujarat.