Armed Forces Flag Day is celebrated on December 7 to collect the funds for the betterment of the Armed Forces. 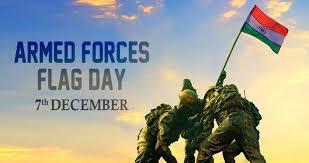 Every year on December 7, our country celebrates the Armed Forces Flag Day to honour the soldiers in the uniforms who have fought for the safety and security of our nation. The day is celebrated across the country and the services rendered by personnel of the Army, Navy and Air Force are remembered.

On this day, small flags are distributed in the schools, universities, colleges and other academic institutions. The idea behind the distribution of the flags is to collect funds for the betterment of the Armed Forces.

For the first-ever time, Armed Forces Flag Day was celebrated in 1949. On August 28, 1949, the Defence Minister and an appointed committee agreed to have an annual Flag Day on December 7.

Kendriya Sainik Board, which is a part of the Defence Ministry, is responsible for the administration of AFFDF. Kendriya Sainik Board (KSB) formulates and operates various welfare and rehabilitation schemes for Ex-Servicemen (ESM) and their dependents through a network. These welfare schemes are funded from Armed Forces Flag Day Fund (AFFDF) which was instituted vied Gazette of India notification No 5(1) /92/US(WE)/D (Res) dated 13 Apr 1993, by an amalgamation of the following into one fund named as "Armed Forces Flag Day Fund".

Many leaders extended greetings and wish today on the occasion of Armed Forces Flag Day 2021.

Minister of Roads Transport and Highways, Nitin Gadkari, took Twitter and wrote, “Salute to the men in uniform who valiantly fought on our borders to safeguard the country's honour. #ArmedForcesFlagDay”

BJP extended the wishes through their official Twitter account and wrote, “We stand in solidarity with our Armed Forces on #ArmedForcesFlagDay.”

While extending the greeting, West Bengal Governor Jagdeep Dhankar tweeted, “On the occasion of #ArmedForcesFlagDay, salutations to our Armed Forces and their families for unparalleled duty and selfless dedication. The country will always be grateful to all the members and families of @adgpi @DefenceMinIndia #ArmedForces #AzadikaAmritMahotsav @KSBSectt”.

Union Minister Piyush Goyal urged the people to donate. His tweet read, “On #ArmedForcesFlagDay, I salute the indomitable courage & the immense love our armed personnel has for भारत.

Today, let us all contribute generously to express our gratitude towards our brave soldiers & their families for their sacrifices. Donate at: https://ksb.gov.in/FundPayment.htm”

Shiromani Akali Dal (SAD) tweeted, “On the #ArmedForcesFlagDay, Akali Dal pays homage to the valiant soldiers who laid down their lives in the service towards the motherland. The supreme sacrifices of all the valiant heroes will keep them alive in the hearts of the countrymen. Jai Hind.”