Arshi Khan met with an accident on Delhi's Shivalik Road. In addition to the actress, her assistant was also in the car. 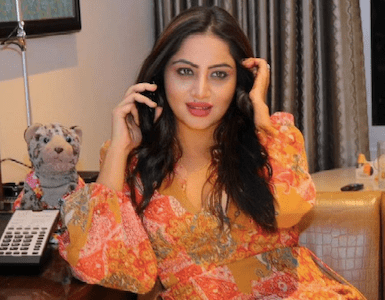 According to media sources, 'Bigg Boss 11' contestant Arshi Khan narrowly escaped a major car accident in Delhi's Malviya Nagar on Monday. However, due to minor injuries, the actress has been admitted to a Delhi hospital.
Also Read: Arshi Khan reveals her family might CALL OFF her engagement to Afghan cricketer after Taliban's takeover
According to the sources, Arshi Khan was involved in a serious collision on Shivalik Road in Delhi. Aside from the actress, her assistant was also in the car at the time of the accident. However, the airbag inflated, resulting in no serious injuries. She also had chest pain after surviving the accident, according to the report.
Also Read: "I am going to give sex education to my children": Arshi Khan on Hathras Case

The actress, who was released from the hospital on Tuesday morning, informed a media outlet that she is doing well. "I was heading out in the car and when I noticed that some fans spotted me and were coming forward," Arshi said of the collision. I requested my driver to slow down so I could wave or even smile at them, and that's when we were hit from behind by another vehicle. The front glass was entirely smashed, and I had a head injury as a result. I attempted to exit the vehicle, and I recall several individuals racing towards the vehicle to assist me, tabhi mai behosh ho gayi. When I was unconscious, I was taken to the hospital. I'm grateful that no one else was injured in the collision; the car was shattered, and I was injured. I thank God every day that I did not have any internal injuries. "All test results were normal," the doctors said after a thorough examination.
She created enough fuss during her time on 'Bigg Boss 14' because of her romance with Abhinav Shukla. Arshi Khan will star in a swayamwar programme called 'Ayenge Tere Sajna,' according to sources. During an interview with a leading daily the actress asked 'Bigg Boss' host Salman Khan to assist her in finding the appropriate life mate. "I believe Salman Sahab should assist me in my search for a groom on the show." He is the only individual who has aided me in my growth and achievement. On 'Bigg Boss,' he has taught me life lessons," Arshi told in an interview.
Arshi had previously stated in a recent interview that she was set to marry an Afghan cricketer picked by her father. "In October, I was going to tie the knot with an Afghanistan cricketer. My father hand-picked him. We cancelled the engagement when the Taliban gained control of Afghanistan," Arshi stated.
They are also on speaking terms, according to Arshi. "He was the son of a friend of my father's. So now we're on speaking terms and are friends, but I'm happy. "Now I'm certain I'll meet my soul mate in an Indian man," she remarked.
Arshi has appeared in television programmes such as 'Vish,' 'Ishq Mein Marjawan,' and 'Savitri Devi College & Hospital,' among others.