In the latest video tweet, Nawab Malik has issued pointers from the copy of Bombay High Court and said that "Such wastage of public funds should stop.” 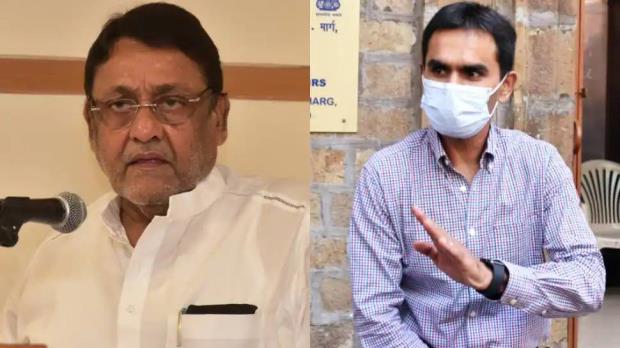 
In the latest video tweet, Nawab Malik has issued pointers from the copy of Bombay High Court and said that "Such wastage of public funds should stop.”

“High Court order proves that the #AryanKhan case was a case of Kidnapping and Ransom. It was pre-planned but a selfie released in public domain failed the plan. The Farjiwada now stands exposed,” the NCP leader Nawab Malik tweeted on Saturday.

Bombay High Court on Saturday in its detailed order on Aryan Khan’s bail application revealed that the court has found no evidence against the accused to prove they had conspired to commit an offence.

Also Read: ‘Khoya Paaya’ song from ‘Dhamaka’ is music to the ears

To support his claims, Malik in the video said that the case against Aryan Khan was bogus and the NCB official should be suspended following the court's findings. The court’s order raises doubts on the NCB’s arrest of Aryan Khan, said Malik, repeating his allegation loud that the kid was kidnapped for the purpose of extortion.

It is to be noted that Nawab Malik has been targeting Sameer Wankhede ever since that cruise raid happened and Aryan Khan was arrested by the NCB officers on October 2.

The minister in the video further alleged that Wankhede has approached the high court when actor Rhea Chakraborty was granted bail last year by the lower court in an alleged drugs case and now the NCB officer would move to teh Supreme Court in Aryan Khan’s case.

Aryan Khan was granted bail on 28 October whose detailed order was made available on Saturday by a single bench comprising Justice NW Sambre on the assurance of a personal bond of ₹1 lakh each.

According to the bail order, Aryan Khan, his friend Arbaaz Merchant and fashion model Munmun Dhamecha, WhatsApp chats obtained from Khan’s mobile shows nothing objectionable that would suggest that he and others had hatched any conspiracy.

"There is hardly any positive evidence on record to convince this Court that all the accused persons with common intention agreed to commit unlawful act," the high court said in its 14-page order as it granted bail to Aryan Khan, Arbaaz Merchant, and Munmun Dhamecha.

Aryan Khan was not in possession of drugs while the other two had "small quantities" of drugs under the NDPS Act, the HC court noted. Meanwhile, all the three accused are told to not leave the country without permission from the trial court and inform the NCB if they are intending to leave Mumbai.