As the last US soldier leaves Afghanistan, putting an end to 20-year long war

The US had fixed August 31 as the deadline for retreating its forces from Kabul. As per estimation, over 122,000 people have been airlifted from Kabul airport since August 14. 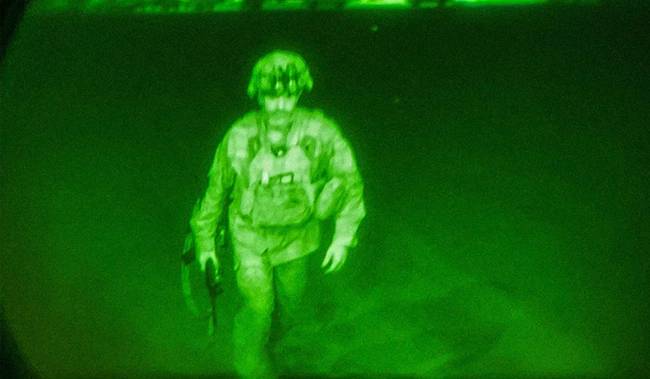 Ending a brutal 20 year-long fight in Afghanistan, the US evacuated its last troops from the Kabul international airport on Monday night. In an image shared by the Department of Defense, Army Major General Chris Donahue, the commander of the 82nd Airborne Division, was the last American to leave Afghan land. as the C-17 Globemaster III departed Kabul airport. With this, it’s an end to two weeks scrambling evacuation by the US and NATO allies from Afghanistan.

Sharing a photo of the leaving soldier, the department of defence on Twitter, wrote, "The last American soldier to leave Afghanistan: Maj. Gen. Chris Donahue, commanding general of the 82nd Airborne Division boards on US Air Force C-17 on August 30th, 2021, ending the US mission in Kabul.”

The flight also took the ambassador to Afghanistan,  Ross Wilson, to his home as the US troops withdrawal came just before the end of an August 31 deadline finalised by president Biden calling the stop on America’s longest war, one that has claimed over 2,400 US service members lives.

The US had fixed August 31 as the deadline for retreating its forces from Kabul. As per estimation, over 122,000 people have been airlifted from Kabul airport since August 14, a day before the Taliban captured Kabul, killing nearly 240,000 Afghans and termed as the most expensive war costing some $2 trillion.

After the US evacuation plane fled out of Kabul airport, celebratory gunfire rang out in the city as the Taliban declared "full independence" for Afghanistan and termed it as a watershed moment for them.

On early Tuesday, Taliban spokesman Zabihullah Mujahid stated that “American soldiers left the Kabul airport, and our nation got its full independence.”

Expressing joy on the occasion, another senior Taliban leader, Anas Haqqani said he was proud to witness "these historic moments".

“I'm here to announce the completion of our withdrawal from Afghanistan and the end of the military mission to evacuate American citizens," US General Kenneth McKenzie told the reporters in Washington, as the US troops left Afghan soil before the actual deadline,

"Tonight's withdrawal signifies both the end of the military component of the evacuation but also the end of the nearly 20-year mission that began in Afghanistan shortly after September 11th, 2001."

Joe Biden would address America on Tuesday in Washington.

The US forces invaded Afghanistan as an outcome of the 9/11 attacks in 2001 for anti-terror operations that toppled the Taliban. In the following years, the American military stayed in the nation and took on the task of nation-building by providing financial aid, building educational institutes, and trained Afghan forces to fight the Taliban militants.

However, all these efforts turned out to be in vain after the Taliban regained the country on August 15, emerging stronger than before. The seizure took place even as the foreign forces just started withdrawing the troops from the country as a peace deal agreed between the US and the extremist Islamist group.

According to an agreement authorised in February 2020, Washington committed to withdrawing its forces, while the Taliban accepted not attacking the American troops, meanwhile, they fully evacuated their forces.

Meanwhile, the US secretary of state Antony Blinken said America will keep providing its humanitarian assistance to the Afghan people with the support of independent organisations like the United Nations agencies and NGOs.

Its an end to the longest war

After August 15, the US and its allies were struggling to airlift their citizens as well as journalists, nationals who wanted to leave Afghanistan, and local embassy staff out of Kabul.

The evacuation became more deadly when a suicide bomber hit the Kabul airport killing more than 170 Afghans and 13 US servicemen. IS-Khorasan claimed responsibility for the attack - which is an ardent enemy of the Taliban and said to be even more extremist than the Talibans.

The hardline group's coup upon Kabul and the Afghan president Ashraf Ghani's fleeing the country sparked panic amongst the civilians, resulting in thousands of Afghans crowding the Kabul airport in the hope to escape the country to be led by the Taliban

In a desperate bid to leave the nation, fee clung to a US military aircraft as it took off, only to fall from the sky.