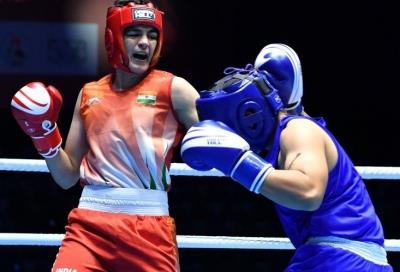 Similar to Lovlina, Parveen (63kg), who was also making her maiden appearance in the Asian Championships final, looked confident against Kito Mai of Japan. The 2022 World Championships bronze medallist Rohtak-born boxer out-punched her Japanese opponent in a 5-0 win.

The 2016 World Championships silver medallist Saweety (81kg) got the better of Gulsaya Yerzhan of Kazakhstan in her second final in the Asian Championships. Having suffered a defeat in the 2016 final, Saweety looked in no mood to settle for another silver this time around as she displayed sheer confidence before winning the bout 5:0.

Up against the local favourite Islam Husaili, Alfiya (81+kg) handed India its fourth gold in the women's section after her opponent was disqualified by the judges towards the end of the first round.

This was Indian women's third-best performance at the prestigious tournament in terms of winning gold medals, after seven gold medals in 2005 and five in 2003.

Meanwhile, debutant Minakshi (52kg) signed off with a silver medal as she fell to a 1-4 defeat against 2017 Youth World Championships bronze medallist Kinoshita Rinka of Japan.

On Saturday, five-time Asian Championships medallist Shiva Thapa (63.5kg) will look to clinch his second gold medal when he takes to the ring against Abdullaev Ruslan of Uzbekistan. Having already confirmed his sixth medal, Thapa is the most successful mal