Asim Riaz gets flak for his tweet; clarifies its not for Sana 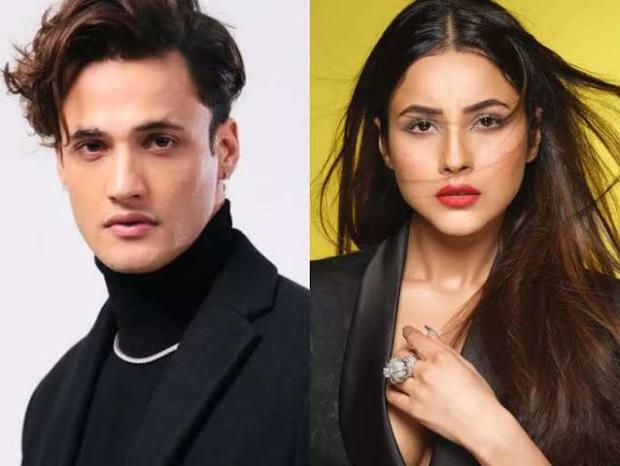 Recently a video and some pictures of Punjabi actress and Bigg Boss 13 contestant Shehnaaz Gill got viral on social media. She attended her Manager's engagement ceremony. She was happily dancing in the video. Sana isolated herself after the death of his boyfriend Sidharth Shukla. She recently came outside for her movie's promotion 'Rakh Hosla'. It is the actress's first activity after the Sidharth Shukla.
Asim Riaz taking to his tweet wrote, "Just saw few dancing clips... seriously people get over loved ones so soon kya baat kya baat... #NewWorld"
Asim Riaz didn't mention anyone in his tweet, but some are thinking that this comment is for Shehnaaz Gill as she is going outside doing parties. The controversy began here when Shehnaaz Gill fans came in the actress's support. They took to their Twitter accounts and trolled Asim Riaz in the comment section.
Fans are continuously posted tweets in the actress's support. Not only Fans but some celebrities also come forward in support of Shehnaaz Gill. Vikas Gupta is also known as Bigg Boss Mastermind posted Shehnaaz Gill's viral video and supported her by writing a note.
In the caption, he wrote, "Everyone has their own way of dealing with grief and hurt. As we enter this world it's not just one relationship that you enter into thats your mother but then father your siblings grandparents relatives post which it's the family you choose Your friends Your mentors."
Vikas Gupta further added, "Sometimes we are closer to our one than our others, friends than siblings love isn't and shouldn't be dependent on any basis. When you loose any loved ones do you stop celebrating love from others. Loosing a family member doesn't make you have bite of a cake from your best friends birthday party sometimes it's cause it's your fav chocolate and you are hungry and sometimes it's cause you don't want your friend to feel bad. Life goes on and it should."
After repeated accusations, Asim finally came forward and posted an Instagram story in his clarification. Asim wrote, "Guys I got your attention and I think I need to clear this now.. I lost one of my good friend last month from Jammu and few of my friends from the same group are partying Ryt now in Goa.. so I was actually telling them not who u all are assuming and remember if i wanna say anything I have those guts to come up say it directly... I have close ones too, I have my hommies around too so stop targeting stop taking out loopholes and stop taking sympathy." 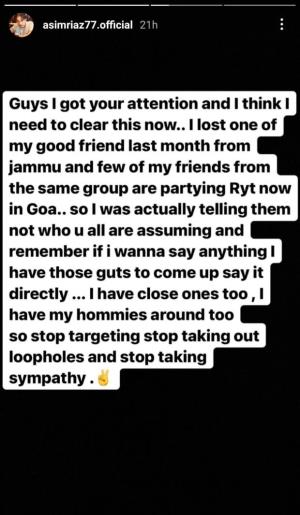 Also read: ‘The Batman’ Trailer: Batman and Catwoman team up to save Gotham
Asim Riaz's tweet created a very tense atmosphere. The tweet offended Sana's fans and they came forward for the actress's support. There is no activity from Shehnaaz Gill over the whole controversy.