Bazball at its best! England smashes 112-year-old test cricket record with 506/4 against Pakistan on Day 1

En route to their world-record run, 4 English batters scored a ton with Harry Brooks remaining unbeaten with 101 at the stumps Author : Tushar Singh 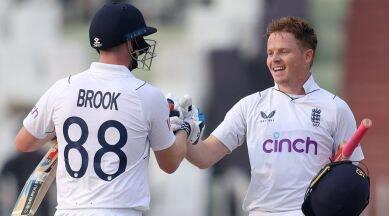 The T20 and ODI WC-winning team England led by Captain Ben Stokes has gone on to script history in Test Cricket after surpassing the 112-year-old record of the format held by Australia of scoring the highest runs at the end of day 1 in the match against Pakistan at the Rawalpindi in Pakistan.

England while batting first posted a mammoth total of 506/4 surpassing Australia’s 494/6 at the end of day 1 which was registered against South Africa way back in 1910. The record is special in multiple aspects as it could have been 50-60 runs more had the play didn’t stop 15 overs before owing to bad light.

Opting to bat first England’s absolute firework of bazball cricket was on display with four centurions beginning with openers Zak Crawley and Ben Duckett scoring 122 and 107 respectively before departing for the pavilion later wicketkeeper batter Ollie Pope joined the party with 108 scoring above the Strike Rate of 100.

Harry Brook joined late and was the show-stealer with his unbeaten 101 of 84 balls with 14 boundaries and 2 maximum. He was accompanied by captain Ben Stokes at the stumps who smashed 34 of just 15 deliveries.

While for Pakistan, Zahid Mahmood (2), Mohammad Ali, and Haris Rauf remained successful with a wicket each in the runs galore at Rawalpindi.