On Saturday, he planted a sapling in the front yard of his New Delhi home. 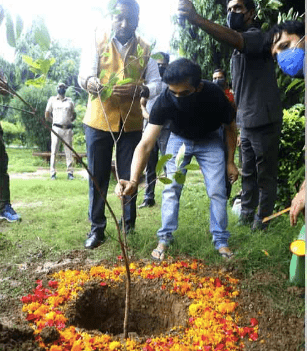 Hyderabad: Gautam Gambhir, an international cricketer and Lok Sabha MP, praised the Telangana government's efforts to increase green cover in the state through Haritha Haram and the Green India Challenge. On Saturday, he planted a sapling in the front yard of his New Delhi home. Raghav, a Green India Challenge representative, later presented Gautam Gambhir with a copy of the Vriksha Vedam book.

Speaking at the event, Gambhir described the Green India Challenge, which was established by MP Santosh Kumar, as a fantastic initiative in which everyone should join and plant trees. He expressed his delight at being a part of the challenge and encouraged everyone to plant and protect at least one seedling. The BJP MP for East Delhi said he will carry on the TRS MP J Santosh Kumar's tree-planting initiative and encourage others to do so on a regular basis. He'd also issue a Twitter challenge to three additional individuals to plant saplings.
Also Read: Medvedev lifts US Open trophy, denies Djokovic calendar Grand Slam

Gambhir discussed how the Yellow Brigade may profit from players who aren't getting a chance to play international cricket ahead of the mouth-watering encounter between CSK and Mumbai Indians (MI), which is billed as the curtain-raiser of the UAE leg.

"Yes, they have guys who don't play much cricket, but that may be a benefit at times because there's no pressure to play international cricket or to make a return. They've placed themselves in such a position that even if they start slowly, it won't make a significant difference. You may still qualify for the top four if they start slowly in one or two games, and once you do that, it's anyone's game "According to Gambhir.

The Dhoni-led CSK finished off a great run at the Wankhede Stadium during the India round of the IPL 2021. "Plus, if you've played at the Wankhede, you'll be better prepared for these conditions because Wankhede is a very difficult ground. They've done something right to be in this position despite having such a squad, and they'll take that confidence with them," the former Kolkata Knight Riders and Delhi Capitals skipper a
dded.