Centre’s farm laws were first implemented by the Badals in Punjab: Navjot Sidhu

Lashing out at Badal and his wife and his wife and former Union minister Harmsimrat Kaur, Mr Sidhu accused them of blatantly cheating and lying to the people of Punjab with their double standard on the farm bills. 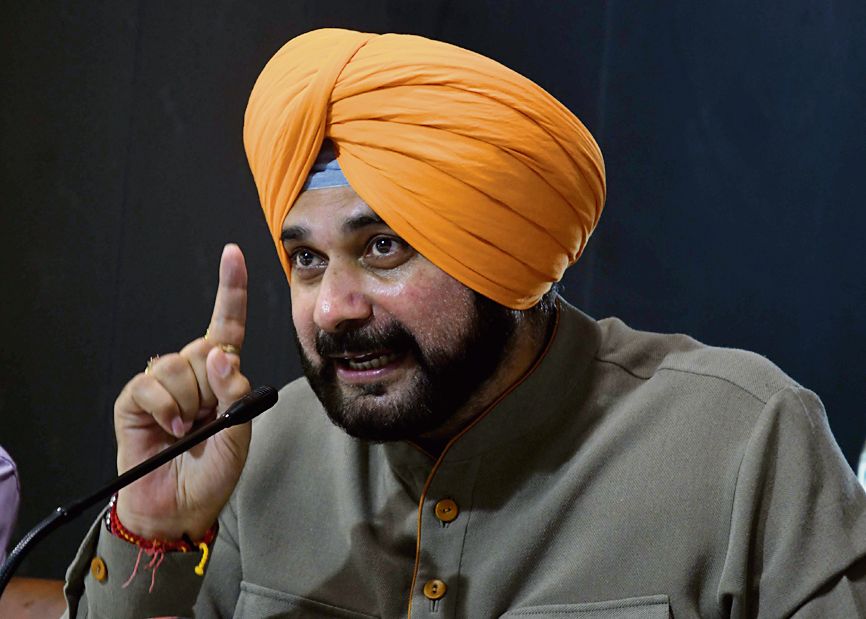 Hitting out at the Shiromani Akali Dal’s (SAD) Sukhbir Singh Badal, Punjab Congress president Navjot Singh Sidhu during a press conference in Chandigarh on Wednesday, said that the Central Agricultural Reform Act is a carbon copy of the Punjab Farming Act 2013. The centre’s farm laws are identical to that of Punjab’s law, just with minor changes. Parkash Singh Badal-led Shiromani Akali Dal-BJP government had laid the foundation of the Centre’s three farm laws, Sidhu alleged.

Sidhu alleged that Badal had called the three farm statutes “pro-farmer” and “withdrew” when the Punjab government passed a resolution demanding the complete removal of the three laws during the state assembly budget session in March.

Referring to the Punjab Contract Farming Act, 2013, Navjot Sidhu told the media, “These (the three farm laws) were implemented by the Badals in Punjab first and then the Narendra Modi Government framed the three laws. The Centre’s farm laws are a photostat copy of the Act brought by the Badals.”

The Congress president said that the policymaker of these laws is Parkash Singh Badal, who tried to implement it first in Punjab and then in the whole country.

Sidhu claimed that Badal “favoured the ordinances, opposed resolution arguing that there was nothing wrong in the ordinance, describing it as pro-farmer”.

Leaders of the Akali Dal had created a ruckus in the assembly when chief minister Amarinder Singh was responding to the Governor's address on the day the resolution to dissolve the laws was passed in the House in early March. Lashing out at Badal and his wife and his wife and former Union minister Harmsimrat Kaur, Mr Sidhu accused them of blatantly cheating and fooling the people of Punjab with their double standard on the farm bills.

After enacting the controversial laws, the Akali Dal has parted from BJP for only a while, said Sidhu, adding that it would again make an alliance with them after the Punjab assembly elections are done.

Calling the laws a conspiracy to enslave the farmers, Sidhu said that in the laws made in Punjab by the Badals there is no mention of Minimum Support Price anywhere. In contrast, 108 crops were added to the Schedule Act, where wheat and paddy are also included in it with MSP.

Under the Punjab farm laws Act, corporates were allowed to buy at a rate lower than the MSP. The SDM would settle the dispute between the corporate and the farmer, but if the farmer disagrees, he does not have the right to go to the civil court. If the farmer has a loan on himself, then it would be recorded in his land papers. The farmer will not get a loan and other facilities. At the same time, if the farmer is unable to pay the loan, he will be imprisoned for one year and fined 5 thousand to 5 lakh.

While arguing on why the farm laws would benefit the farmers, Union agriculture minister Narendra Singh Tomar too had referred to the Contract Farming Act in February this year in the Rajya Sabha.  "Punjab Contract Farming Act provides for jail and fine up to ₹five lakh for the farmer. In the Act made by the Government of India, the farmer can come out of contract farming at any time," Tomar had stated in the House.

Sidhu's attack comes at the time when the SAD is gearing up to observe September 17 as a ‘black day’. On that very day, protests against the farm laws would complete a year. Badal has requested protesting farmers to join them in the rally from Gurdwara Rakab Ganj to Parliament with the demands to abolish the three laws.

Speaking on pro-farmer schemes that favoured farmers, Sidhu said such policies were brought by the Congress party in the state while it was in power