Anushka plays along in order to gain an answer from Virat, who dances to the song Chand sa roshan chehra. 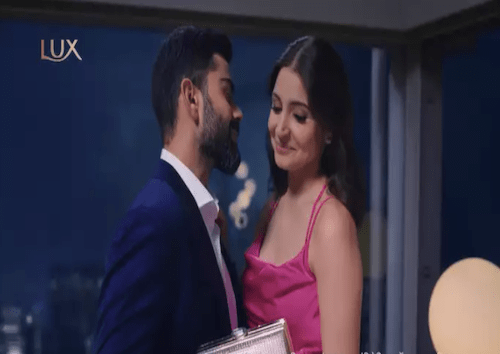 The film provides a behind-the-scenes look at Virat and Anushka's lives, complete with all the glitz and glam that comes with it, confirming the brand's history as the soap of choice for movie stars.
Also Read: Anushka Sharma teases Virat Kohli after cricketer demands photo credit


The anecdote depicts Virat's reaction to Anushka's Lux shine. Anushka plays along in order to gain an answer from Virat, who dances to the song Chand sa roshan chehra. See ad here.

Virat and Anushka perform a modern version of the Shammi dance with panache, and Virat appears to be absolutely taken aback by Anushka's radiant glow.  The story presents their modern-day relationship, in which they are both playful and adoring of one another.

This campaign was adapted by using renowned songs from the region's popular culture, such as Sohag Chand in Bengali, Chanda kinta Chanda in Kannada, and ilaya nila polikirathu in Tamil, and so on.

“The aim here was to return the magic back to the brand by giving a sneak peek into celebrities lives,” said Sagar Mahabaleshwarkar, Chief Creative Officer, Contract India. The ongoing attempt is to make the storey relevant to the celebrity's life and to highlight the male-female chemistry. The plot is simple: the male is enthralled by her glow, which is made possible by Lux soap.”

“The task assigned to the team was to relaunch Lux and explain the benefit of moonlight glow by offering the brand a fresh viewpoint that is current and culturally relevant,” said Severine Vauleon, Global Vice President, Lux. While there was a brand story to tell, we wanted to do so in an interesting way.And there's no better way to do it for audiences across regions than by leveraging popular culture with multi-language songs that represent a woman's beauty as having a "moonlit radiance," which is compared to the moon.”

“This film is part of the campaign conceptualised by Wunderman Thompson South Asia, where the agency explored the thought of creating a locally tailored campaign for multiple regions within the country with multilingual songs, that brought alive the brand's proposition of comparing a woman's beauty to the moon, an oft used metaphor in Indian cinema,” Kishore Tadepalli, Managing Partner and Sr Vice President, Wunderman Thompson, Mumbai added.