Iran too had strongly condemned the Taliban for the attacks on Panjshir and called on Pakistan to not cross the line. 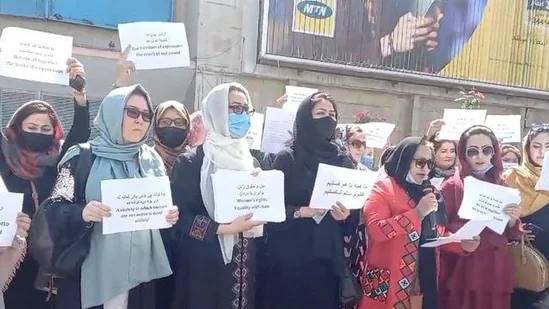 Several men and women took to the streets of Kabul chanting slogans against Pakistan as they claimed the latter jets conducted airstrikes in Panjshir province.
They have gathered at the gate of the Pakistani embassy in Kabul and said that they do not support a puppet government in Afghanistan and asked for an inclusive government.
The people gathered after co-leader of the resistance front in Panjshir province Ahmad Masoud in a voice clip called on people of Afghanistan to resurrect against the Taliban, Khaama News reported.
Protesters were chanting "death to Pakistan" and asked for the Pakistani embassy to leave Afghanistan.
"Freedom", "Allah Akbar", "we do not want captivity" were among the slogans chanted by protesters in Kabul. Many of the demonstrators at the centre were women.
The Taliban fighters reportedly conducted aerial firing to disperse the protesters but they were still protesting and fewer people were dispersed.

In the meantime, people in Balkh and Daikundi provinces too took to the streets and chanted slogans against Pakistan.

For several kilometres well-disciplined Taliban members allowed a protest of approx 300-500 to continue through the streets of Kabul. Talibs guarding Zanbak Square, however, fired in the air, beat protesters, vandalised a vehicle leading them and tore cameras from journalists.
Iran has also reacted to the airstrikes in Panjshir province and the spokesperson of the country's Foreign Ministry has asked for investigations over what he called the interference of foreign jets. It has also called for the formation of a people-elected government in Afghanistan.

The Afghan neighbour expressed hope that elections are vital to Afghanistan's successful future and that peace will be restored in the country.

The Taliban on Monday had said that it ‘completely captured’ Panjshir valley, the last stronghold against the Islamist group. However, the resistance force has said that the information is false and alleged that Pakistan is helping the Taliban with supplying weapons and intelligence services.