Ahead of crucial assembly elections in Punjab, CM Channi added 58 new buses to the state's fleet. 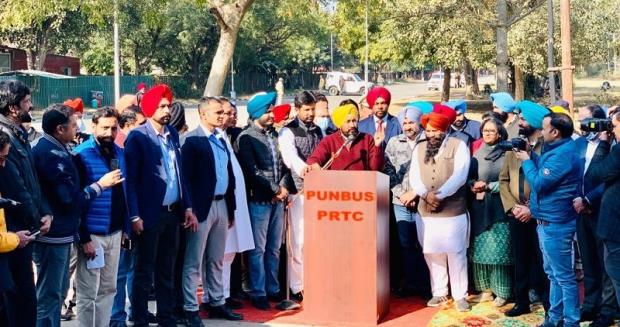 Ahead of crucial assembly elections in Punjab, Chief Minister Charanjit Singh Channi announced free bus services for students. In what could be considered as an electoral stunt in Punjab, the CM Channi also drove the state transport bus as he added 58 new buses to Punjab Roadways and PRTC's service.
Notably, the Punjab government is already providing free bus service to women in the state.
CM Channi was accompanied by Transport Minister Amrinder Singh Raja Warring at the event where he made the big announcement.
Punjab Roadways, Punbus and PRTC received 58 new buses from the Punjab government today. A total of 842 buses will be added to the state's fleet.
Mr Warring announced the news on Twitter, saying, "In yet another major decision implementation, we have today dedicated 58 new buses to people of Punjab. CM @CHARANJITCHANNI ji today flagged off the new fleet. These modern vehicles are part of 842 buses being added into state fleet in one go for the first time ever."
On this occasion, the Chief Minister stated that free bus transport was previously solely available to women, but now college students will also have the benefit of free travel. "Now they don't have to quit studies due to lack of transportation," CM Channi was quoted saying by Dainik Jagran.
Also Read: Ahead of polls, Covid testing tally drops in Punjab
According to the Chief Minister, the government buses were previously at loss due to the transport mafia in Punjab. "Our Transport Minister Mr Warring has finished the mafia, resulting in increase department earnings. Our profit has been increased by Rs 1 Crore, which has enabled us to acquire new government buses," said CM.
Taking a dig at the SAD chief, CM Channi said that "Bus mafia have been finished. Badals' private transport services are being investigated. Those who were running illegal buses in Punjab are under the radar."
“Punjab is advancing,” said CM Channi.
Earlier in a bid to empower women and girls in the state, the Punjab Government had allowed free travel for women in all government buses in April.
Who else can travel free of cost in Government buses?
As per the official website of Punjab roadways, Police personnel, jail personnel, freedom fighter along with one attendant, press reporters, MLAs or ex-MLAs, cancer patients, blind people, widows of terrorist victims can travel free of cost in Punjab roadways and PUNBUS buses.