Repealing of farm laws is baseless until and unless guarantee of MSP for crops is not made: Punjab CM 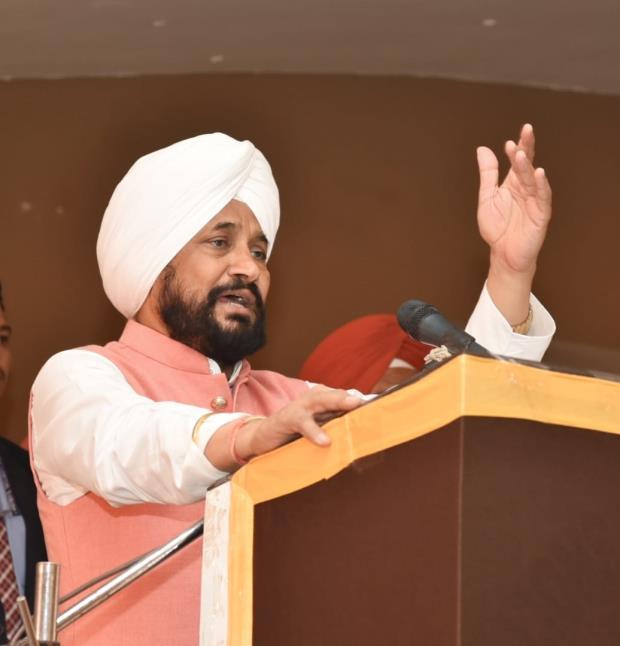 Punjab Chief Minister Mr Charanjit Singh Channi today said that Prime minister Mr Narendra Modi has just made an announcement regarding repealing of farm laws and Punjabis especially farmers need to be cautious until the farm laws are formally repealed.

Addressing the gathering after laying the foundation stone of new sugar mill here today, the Chief Minister said that conspiracies are being hatched to derail progress and prosperity of Punjab adding that those are welcoming the announcement of Prime Minister are a part of this. He said that repealing of laws is baseless until and unless guarantee of MSP for crops is not made. CM Channi said that the Punjabis must not sit ideal but have to be extra vigilant until the entire process is completed.

Making a scathing attack on people who are welcoming the announcement of PM, the Chief Minister asked them to explain the reason to rejoice as Punjab has lost more than 700 sons and daughters during the struggle. He said it is shameful that for the sake of their vested political interests some political leaders are bent on sacrificing the interests of the state. CM Channi announced that state government will construct a memorial in name of these martyrs to perpetuate their glorious struggle for our younger generations.

Taking Akali leadership to cudgels, the Chief Minister said that the Akalis were the chief architect of anti farmers bill as they had brought one such bill in Punjab assembly which became basis for Union government to introduce it now. He said that Akalis were hand in glove with BJP in bringing these draconian laws and even they eulogised these bills until the public pressure forced them to take an opposite stance. CM Channi said that Akalis have always ignored the interests of state and its people adding that this bill was a testimony to it .

Training guns at the Aam Aadmi Party, the Chief Minister dared its supremo and Delhi Chief Minister Arvind Kejriwal to enter in Punjab only after repealing the same bill which has been implemented by his government. He said that Punjabis hate hypocrite people and double standards of Kejriwal will not work in Punjab. CM Channi unequivocally said that the Akalis, BJP, AAp and other leaders who singing praises of Modi are double mouth snakes who aim to usurp prosperity and progress of Punjab.
The Chief Minister further said that an elite and unholy nexus of politicians across party line had excluded power from common man just to loot Punjab. He said that the members of this elite group have a common bond in form of their own vested interests and loot of the state adding that they have been ill fully doing this so by enjoying the fruits of power in game of musical chairs where the ruler changes after every five years but power remains in their hands. However, CM Channi said that now this nexus has been broken and the power is with the common man.

The Chief Minister said that the backbone of transport mafia operated by the Badals has been broken. He said that now the permits of buses will be given to jobless youth for making them gainfully self employed. CM Channi said that now it’s the turn of Cable mafia and things will be streamlined for this too.

The Chief Minister said that his government is distributing the public’s money for the well being of people. Listing the several pro-people initiatives taken by his government, he said that Power bill arrears worth Rs. 1500 crore have been waived, Power rates for domestic consumers have been reduced by Rs. 3 per unit, Bills to the tune of Rs. 1200 crore have been waived off in respect of motors in rural areas, water charges brought down to Rs. 50, Rates for sand have been reduced to Rs. 5.50 per cubic feet and Punjab Government is bearing Rs. 35 as part of cost sharing out of increased Rs. 50 of Sugarcane prices while the private mills now only have to bear Rs. 15. CM Channi said that not only this but several other path breaking decisions will be taken in coming days too.

Meanwhile, The Chief Minister said that it was the need of hour to upgrade these mills for strengthening the agriculture sector. He said that both the Deputy Chief Minister Mr Randhawa and Cabinet Minister Mr Bajwa played a key role for bringing this ambitious project in the region. CM Channi said both these far sighted and strong leaders are acting as a catalyst for development of region. The Chief Minister also announced Rs 10 crore for roads and Rs 5 crore for bridges in Batala assembly segment.

The Deputy Chief Minister slammed the former Chief Minister Mr Parkash Singh Badal for stopping research centres for sugarcane thereby hitting the operations of Cooperative sugarcane. He envisioned that this mill will pave for economic prosperity of the region. Mr Randhawa also batted for opening up of extensive research centres for producing hybrid quality seeds for cane production.

Welcoming the Chief Minister, Cabinet Minister Mr Tript Rajinder Singh Bajwa described it as red letter day in history of Batala city. He said that upgradation of this sugar mill will be instrumental in transforming destiny of sugarcane cultivators of the entire Majha region. Mr Bajwa also praised the Chief Minister for taking path breaking initiatives to ensure well being of people of the state.

Earlier, the Chief Minister laid Foundation stone of 3500 Tons of Cane Per Day (TCD) sugar plant expendable up to 5000 TCD along with co-generation plant of 14 Kilowatt capacity at a cost of Rs. 296.15 crore at The Batala Cooperative Sugar Mill. The landmark initiative will lead to the crushing of 35000-40000 quintal sugarcane daily besides supplying of 8.5 MW power to the State grid. The production of pharmaceutical sugar and refined sugar will be another salient feature of the initiative.