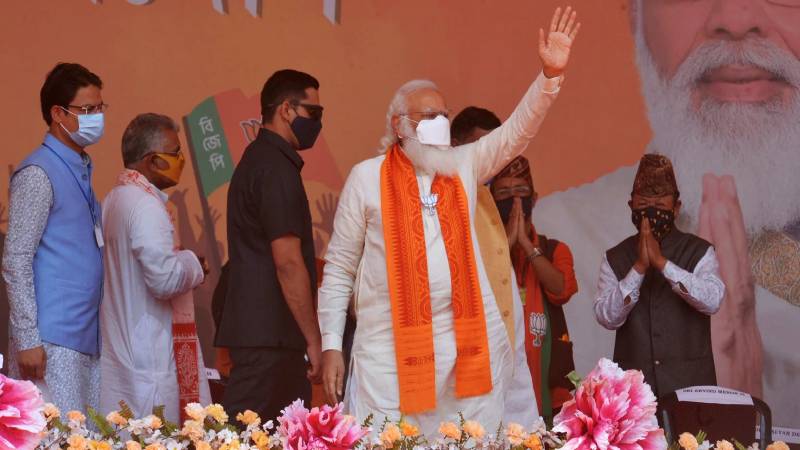 In flak of criticism from the opposition parties, the Bharatiya Janata Party on Monday has decided to restrict the number of people taking part in the election rallies to not more than 500 in West Bengal. The decision has come considering the substantial rise in the Covid-19 cases in the state, party chief JP Nadda said in a virtual meeting with BJP party workers.

Prime Minister Narendra Modi will now address the public rallies in the open space adhering to the Covid-19 preventive measures, Nadda added. He has also asked his party workers to ensure that every polling booth is virus-free and has directed them to set up Covid-19 helplines in every state to reach out to people for help when in need.

Notably, the Prime Minister is scheduled to hold rallies in Murshidabad, South Kolkata, Siuri, and Maldaon on April 23.

West Bengal Chief Minister and Trinamool Party chief Mamata Banerjee have accused PM Modi of holding massive public rallies amid the sudden spike in the infection cases. She has also held PM Modi responsible for the increase in the Covid-19 cases in the state.

While addressing a rally at Nadia's Kaliaganj Banerjee said, "Why did not you (Prime Minister) make plans to stop corona in the last 6 months?... You have to answer this. The Prime Minister is responsible for the second wave of COVID-19. If he would have taken responsibility at the right time then this would not have happened."

Last week, Mamata Banerjee has already urged the Election Commission of India to club the last three phases of the WB Assembly Elections due to Covid-19 to which the electoral body denied.

Notably, when P Chidambaram in the Congress Working Committee meeting held on Saturday said holding rallies in WB amid the second wave of Covid-19 is not appropriate, Congress leader Rahul Gandhi canceled his rallies.

As of now, campaigning for Phase 6 elections, which are scheduled for April 22, has ended on Monday. The results of the WB Assembly Elections will be declared on May 2.